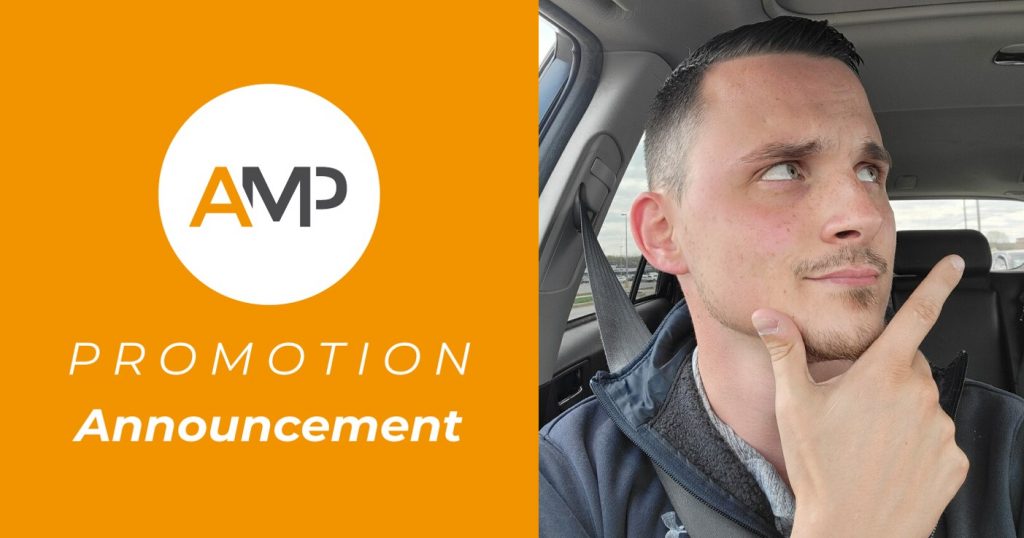 Congratulations to Aaron Richardson on his promotion to Mentorship Manager!

In his new role, Aaron will be training and developing his teammates throughout the Central Region at least twice a month! Aaron’s fast start to his AMP career and his willingness to take on more responsibilities in order to help his teammates is what made this an easy decision.

Aaron started with AMP mid-way through January this year. Even when Aaron was in his initial sales training class he turned heads, and I remember Connie Roeder saying something to the effect of “Aaron has a chip on his shoulder! He is determined to make himself known here at AMP”. He did just that! In his first two weeks, Aaron sold 6 new print/OPTIMA™ sales and was averaging one account per day. We talked about the big goal to build Michiana into a powerhouse and he made it known that he wanted help be a part of that mission. Aaron quickly earned a spot on the Mentorship Team and started taking out candidates, playing an important role in evaluating talent in our potential teammates. In his first full month in the field, Aaron notched 5 new print and 6 OPTIMA™ sales and a total of $16,024! After just 7 weeks in the sales field, Aaron sold his 20th New Print/OPTIMA™ account and earned his Senior Sales Rep promotion!

Something clicked with Aaron in March, and he hasn’t looked back. When the dust settled, he had come away with his best sales month yet, locking in 11 new accounts, $7,895 of Optima and a total of $17,860 with 68% POS.

AMP fan favorite and #1 ranked sales maven Kevin Norton spent a day in the field with Aaron, and the only struggle they had that day was coming up with a nickname for Aaron. We still aren’t exactly sure how he landed on “Shemp”, but the nickname stuck and Aaron’s teammates are reminded of it daily as he continues to make sales at such a high frequency. Aaron’s drive, high standard of excellence and work ethic reminds me a lot of Mr Norton…and we all know that is very high praise. Recently, Kevin and Aaron ran a Zoom training for our Central Region. Later that day Kevin said to me “after seeing Aaron on that Zoom call this morning and all the success he’s had of late, I’d put my money on him for Rookie of the Year”.

Getting to know Aaron, I could see how he’s built leadership qualities outside of AMP. Military training prepared him for anything that comes his way. He keeps his fiancée Lazsher and kids Athena (9 mos), Nikolai (3 yrs) and Noah (7 yrs) front & center and they motivate him everyday. Outside of work here at AMP, Aaron continues to advance his education through online classes. Despite already earning a Bachelors of Accounting, he’s now only four courses away from obtaining his MBA with a focus in Marketing. We’ve often heard the AMP phrase “if you’re not growing, you’re eroding” and Aaron seems to live by that.

We are so glad to have found Aaron as he’s had many different experiences prior to starting his AMP career. He started with entry level accounting, moved on to Controller and CFO roles, he built RV’s, he was a laser operator, he sold cell phones and even traveled around the United States climbing cell towers for a living. I asked what Aaron liked most about AMP and he said “I love how AMP truly does care about every single employee and gives us every tool possible to succeed. It’s like one big family who always has your back. I have never worked for a company as badass as AMP.”

I can say working with Shemp has been an incredible experience. He’s appreciative, humble and passionate about winning! One of my priorities at the start of this year was building a successful team in Northwest Indiana and Aaron has played a vital role in doing that. This promotion to Mentorship Manager is exciting because it gives Aaron the opportunity to spread his sphere of influence to other teammates. Meanwhile, we know Aaron will continue to take big strides and attack his own performance- always getting better everyday.

Congratulations again on a well deserved promotion Aaron “Shemp” Richardson! We are really proud of what you’ve accomplished and look forward to seeing you take the next steps mastering your role as a Mentorship Manager!