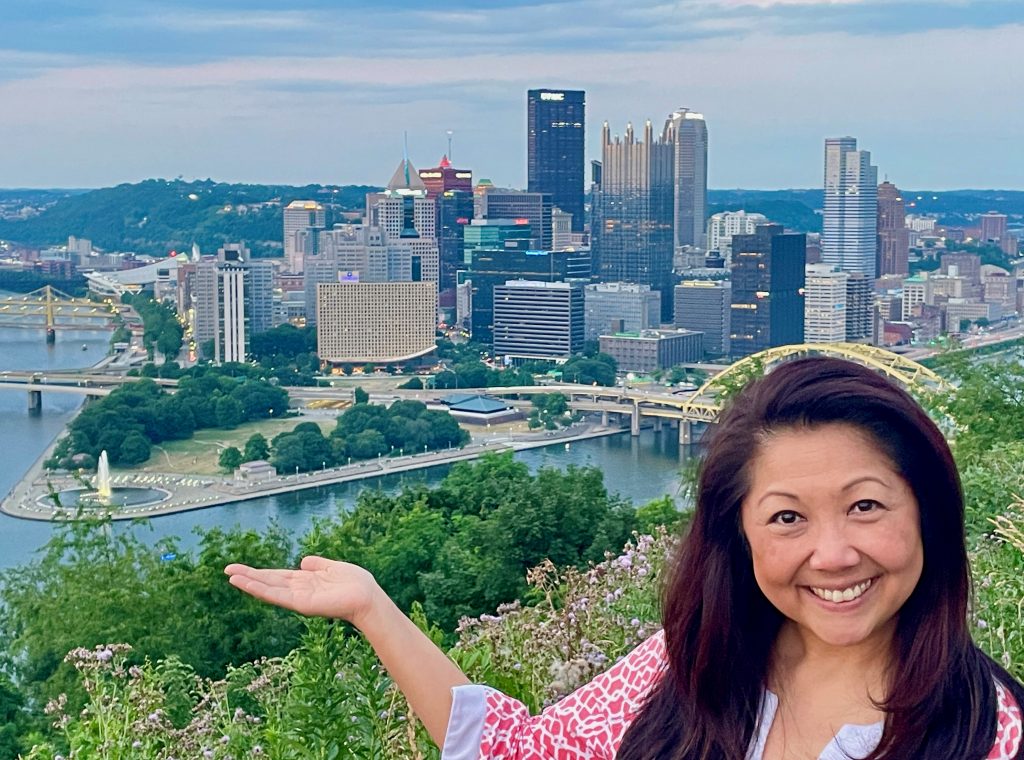 Pictured Above: Kye-Won Doyle, District Manager of the Pittsburgh District, gesturing to the scenic city overview behind her.

AMP packs its bags once again and heads out east traveling 522 miles to the City of Bridges – Pittsburgh, Pennsylvania! Leading the charge is our very own Kye-Won Doyle, the District Manager of the Pittsburgh District, as she sets her sites on helping local small business owners grow in their community.

Kye-Won started her journey at AMP back in November of 2021, when she was brought onto the team as a Hiring Manager for the Chicago and Central Illinois Markets. However, she wasn’t the first in her family to join the ranks here at AMP. Tanner Jaksa, her son, started at AMP about a year ago fresh out of college, and introduced Kye-Won to the AMP family and our mission to build stories of success for small business owners. Kye-Won looks back on Tanner’s start in sales, and how helping him train as a new field representative opened her eyes to the opportunities AMP provides for small business owners.

She recalls, “Historically, I have had a negative opinion of all salespeople, from telemarketers to the people at the mall handing out samples…I was not a fan of him going into sales, but as I helped him learn his GSV [Google Street View] script, I found myself really impressed with AMP’s mission to help small business owners. Then as he experienced success with the company, I was even more impressed by the company’s leadership (Abe and Chad) and how AMP was run.”

Not only does Kye-Won attribute her successes to rising-star-rookie Tanner Jaksa, President and Chief Executive Officer Abe Andrzejewski, and Chief Revenue Officer Chad Campbell, but she also mentions how crucial her first seven months as a Hiring Manager, working with Stephanie Felsecker and Nikki Bowman, were in starting her career with AMP. Kye-Won notes that working with the two not only sparked her strong start, but also positively impacted her transition to outside sales, as she eventually moved into the role of the District Manager of the Pittsburgh District. The admiration and gratitude were mutual and Digital Division Recruiting Manager, Stephanie Felsecker, sings the praises of Kye-Won and her time as a hiring manager.

Stephanie remarks, “Kye-Won was a joy to work with on the recruiting team. She is one of the hardest working people I’ve ever met. She also bleeds passion for everything she does. She continually went above and beyond for her candidates and now is doing the same thing for local small business owners. When Tanner told her about thisprogram he was selling, it was a no brainer for her that all the small business owners she knew, needed this service to help their business.”

Kye-Won details that Nikki and Stephanie taught her so much about routines, goal setting, and managing expectations, and that her time as a hiring manager also opened her eyes to the kind of training, support, and salary that one could obtain at AMP!

The small business owners of Pittsburgh are in great hands where Kye-Won is concerned! When speaking with Kye-Won she vocalizes passionately about her love for working with small business owners and getting to know their stories to help connect the dots of their lives and businesses with others in the community. While the small businesses Kye-Won works with are giving her referrals for business, she makes it her focus to get them referrals in their own community as well. Her main motivation being to help others!

Kye-Won talks about life before AMP stating, “…I was a teacher prior to coming to AMP. All teachers go into education to make a difference in helping others – no one goes into teaching “for the money”…I would never guess that I, myself, would or could ever be a salesperson; however, AMP for me has been about helping others and educating small businesses in how to compete in the Digital Marketing space. When a SBO [small business owner] ‘gets it’, I feel the exact same fulfillment as I did when my students did.”

Outside of work, Kye-Won is married with four children. She expresses that if she could live multiple lives, she would golf, open a restaurant, own a bakery, and read every book on her wish list! When asked what she was most excited about in regards to starting a new market in Pittsburgh, Kye-Won immediately mentions, “I’m most excited about helping small businesses owners here in Pittsburgh. I’m also excited about meeting and training a team of reps to gain financial freedom by helping others!”

AMP would not be able to expand as far as we have in the last few years without the help of our dedicated sales force! Being able to empower representatives, like Kye-Won, who are grasping at opportunities and leading with a passion to help small local businesses in communities across the country, is an indescribable gift.

Congratulations Kye-Won on your many accomplishments throughout your dedicated journey at AMP! We are excited to see the Pittsburgh market grow and thrive right alongside you in 2022.