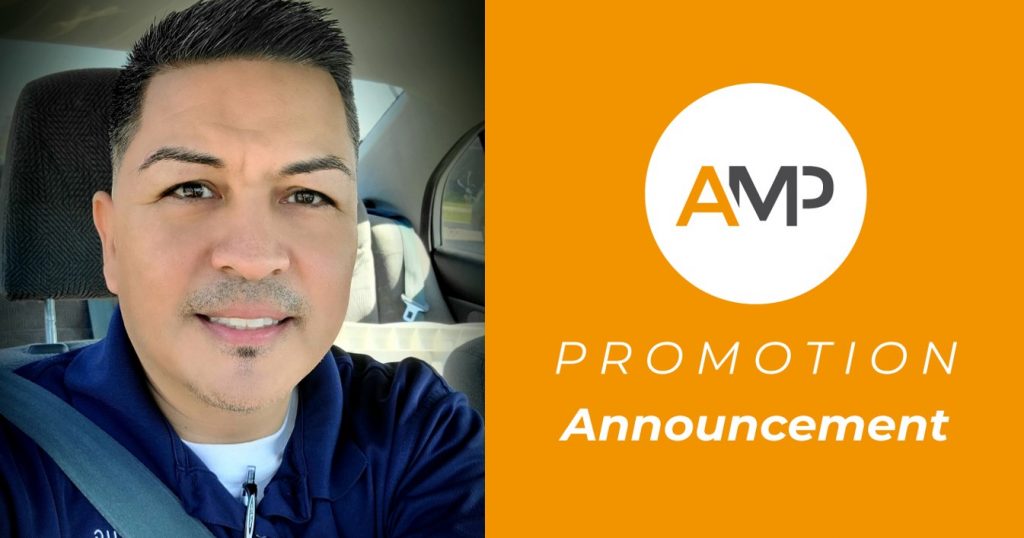 Congratulations to Daniel Chavez on his promotion to Assistant District Manager for South Chicago Digital Market!

Daniel Chavez, affectionately known as “D-Money”, officially joined the AMP family on June 8th, 2020! The start to Daniel’s career here with AMP will always be memorable. He was originally hired in March of 2020 and completed GSV training on a Monday and was scheduled for his 1st day start in the sales field the next day. Well, that Monday evening the pandemic hit and AMP shut down all field sales until further notice. Daniel knew this was the company that he wanted to work for and he waited patiently until AMP was able to open up field sales and start the new hires that were in training class on the eve of the shutdown.

We knew that there was something special about Daniel from the beginning, he possesses a high level of professionalism, a positive attitude and a great work ethic. Daniel is a sponge for knowledge and soaked up all of the training early on that catapulted him to quick success as he quickly completed GSV Onboarding and was ready for OPTIMA™ training.

After being trained on OPTIMA™, Daniel didn’t allow a slowdown in sales as he continued to do what got him there. He continued pumping GSV sales and that allowed him to smoothly transition into OPTIMA™. From the beginning, Daniel has been one of the top OPTIMA™ sellers in the company and he always sells through the yes, as his average sale is one of the highest in the organization.

Daniel has been promoted many times in his AMP career. Senior Sales Rep, Elite Mentorship Team, Mentorship Manager and now Assistant District Manager. He is a selfless leader who always has a smile on his face and is always willing to help others. He has helped many teammates from across the country by jumping on conferences and pitching business owner’s in Spanish.

In his free time, Daniel is a huge baseball fan and he loves attending Chicago Cubs games. Daniel can also be found on the dance floor busting a move as he loves to dance and he also teaches Latin dance!

Raphael Weaver, District Manager for South Chicago Digital, had this to say about working with Daniel, “I love working with D Money because he is always prepared for each day and he has a winning can-do attitude. When he answers your call or when you see him in person he always has a huge smile on his face.  Daniel is such a team player and he has helped many others succeed in his time at AMP.”

Carlos Paz, Assistant District Manager for South Chicago Digital, had this to say about working with Daniel,  “I enjoy working with Daniel because of his no quit attitude. We can have difficult conversations with SBO’s [Small Business Owners], have a lengthy presentation that yields no results, or walk out and it feels like a waste of time, etc. But Daniel just puts his head up and is ready to go on to the next one. In the field Daniel always has his game face on. Daniel likes to make presentations a challenge, and he is always eager to add another type of business that he’s sold to his arsenal.”

Juan Almaraz, Assistant District Manager for South Chicago Digital, had this to say about working with Daniel, “I like working with D money because he is open to learning and he doesn’t give up easily, even when he’s faced with a lot of rejection.”

Daniel is a perfect fit for this promotion because he is a selfless leader. It’s never about him, it’s always about helping his customers and helping his teammates.

Congratulations, Daniel, on this well-deserved promotion!