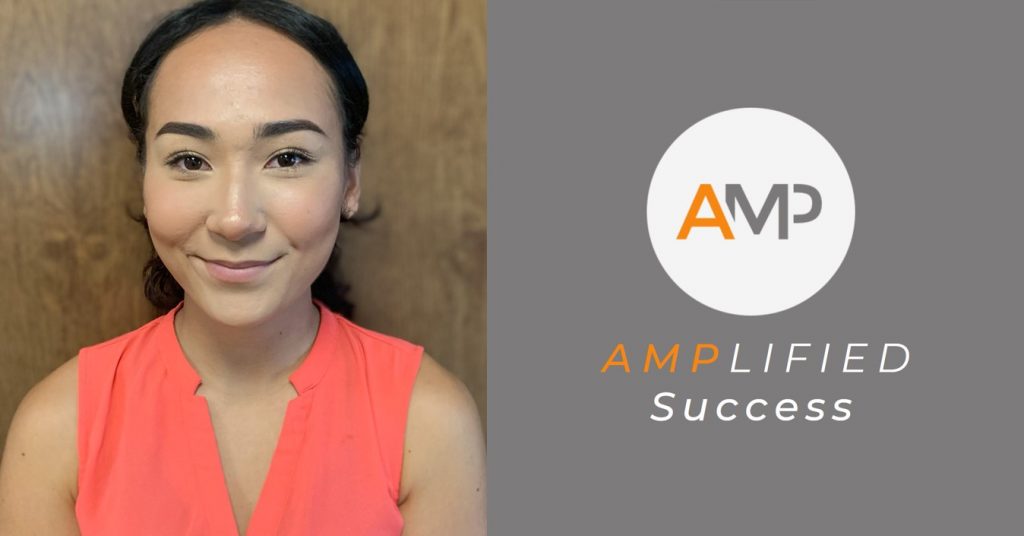 I started working at AMP in the beginning of July – so about 5 months now!

Before starting my career at AMP, I was an undergrad student at the University of Iowa and graduated with a bachelor’s degree in business analytics. Through my education and prior work experiences, I grew my passion for being involved in the business development and growth process and was hoping to continue expanding my knowledge and experiences in this area – AMP was exactly that.

I started as an associate account manager and 9 days later, I secured my 4 new businesses and made my way to account manager! My first new business still holds a special place in my heart, it was all so exciting and motivating that I ended up making my way to senior status 5 weeks later. I really couldn’t have done it without the team here, the ongoing support and help is really what got me to where I am now. Company culture was one of the most important things that I looked for when I was deciding where to begin my career. I really could not have asked for better colleagues – they have become more than just that, but genuine friends.

These last few months have been amazing and I can’t wait to see the opportunities that lie ahead for me with my career at AMP!

On Alyssa’s time at AMP, Morgan Goslin and Whitney Phelps had this to say:

“Alyssa has played a vital role in improving Coralville’s office. She came in as a recent graduate from the University of Iowa with her eyes set on success. She quickly moved up from Associate Account Manager to Senior Account Manger, faster than anyone had seen in the Coralville office to date. She has drive, determination, work ethic, and an incredible knack for seeing small business owners grow and succeed.

One of Alyssa’s first days on the phone, I had the privilege of helping train her while she took her first steps to becoming very successful at AMP. I will never forget one of her first hot leads on the phone — she spoke to a man name Romo with Romo Roofing. He was so intrigued by Alyssa’s words that he actually pulled over on the way to a job site to finish installing a new roof to have a conversation on how OPTIMA™ could change his business forever. Alyssa closed Romo within a week of being on the phones and that was when her first steps turned into a full on sprint. She learned very quickly, spoke to business owners with grace and knowledge, and turned heads by becoming a Senior Account Manager in under 6 weeks. Alyssa brought new ideas and spoke to business owners as if she had known them her whole life.

At this point in Alyssa’s career, it has been my privilege to see her transform from a college graduate to a role model in the company for not only myself but others as well. I’m so thankful that Alyssa is not only a great asset to our team but also an incredible friend.” – Morgan Goslin

“Alyssa Eitland joined the Iowa team as a University of Iowa Alum with no previous sales experience. Her grandfather owned a small business in Anamosa, IA, so she knew that she could be passionate about digital marketing that directly benefits small business owners. Alyssa, the youngest to join the team, held her own. Not only that, but she came onto the Iowa Team making history, not once but twice, with how quickly she promoted herself — from Account Manager after 9 days and then again to Senior Account Manager after 5.5 weeks.

Alyssa is an incredibly hard worker with a huge Why: her family. With her parents being overseas, she’s found a second family among her Iowa Team. Her ability to sponge the tools, going about her work quietly, and getting the job done exceptionally well has earned her several nicknames, one of them being, “the silent assassin”. By demonstrating back to back months with the most New Business (19 NDR in one month), Alyssa is in the running for Top Rookie of the Year. Her high standards and competitive nature make her a force and it shows. Thanks Alyssa, for proving what’s possible and continuing to raise the bar for those around you.” – Whitney Phelps