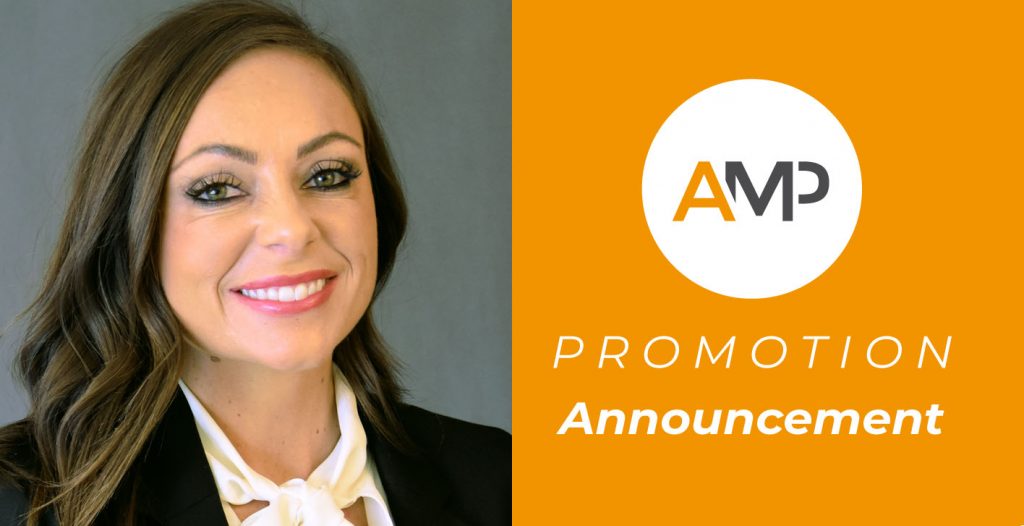 Congratulations to Jamie Weaver on her promotion to Digital District Manager – Phoenix, Arizona!

Jamie’s promotion, while not intended, coincides with her one year anniversary at AMP. It can be argued that few sales people in the history of AMP have joined our company and impacted in their first year in as big of a way as Jamie has.

From the beginning, Jamie made a huge impact.  She earned Senior Sales Rep distinction in less than one month on the job– hitting the magical 30 NEW and/or Digital sales in only 19 business days. From there, Jamie continued to sell at a blistering pace the remainder of the year– securing over $220,000 in total sales for the year, of which $132,000 was OPTIMA™, over $11,000 Text sales, and she secured a fabulous 78 NEW Print accounts for the year. These amazing numbers earned Jamie Team Iowa East Rep of the Month and West Region Rep of the Month on numerous occasions during 2018– ultimately highlighted by her 2018 AMP Rookie of the Year honor.

During the midst of this sensational year, Jamie moved from Burlington, Iowa back to her familiar surroundings in the Phoenix area at the end of June; at that time becoming exclusively a Digital Division rep.

In Jamie’s District Manager role, she will be responsible for hiring, training, and developing a team of sales reps in the Phoenix metro area– an area we see as one of the most key for the company during 2019 and beyond and certainly our most westward area of the AMP landscape.

Jamie was primarily an office manager and administrative assistant prior to joining AMP. She was referred to AMP, and now a year later, talks openly how our company has changed her life. Jamie’s success, coupled with an income coinciding with that, has allowed her to gain immense self confidence, a feeling of being rewarded and appreciated, and has allowed for her first ever vacation with her son– a cruise to Mexico.

Jamie makes special mention to give credit to so many along her way in her first year journey at AMP. She speaks of Kyle Tweeton (who received her referral), to Hiring Manager Kim Patrasso, to Stephanie Conlin (her interviewer), to Connie Roeder (DeKalb New Hire class trainer), to Regional Sales Manager Whitney Phelps– her Manager during her first four months at AMP.

As for Jamie’s personal life, she was born in New Jersey, lived for a time in Ohio, and ultimately her family moved to Arizona. Jamie’s pride and joy, son Tyler (age 12), enjoy spending quality time together in many ways– including going to sporting events. Jamie is adamant about working out. She loves setting big goals– and finds an adrenaline rush in achieving her personal goals.

A lot of hard work lies ahead in the build out of the Phoenix market, but Jamie is more than capable of leading by example and her infectious personality and high level of energy, will create a very successful market in the Phoenix area for AMP.

Listen to Jamie’s incredible Evolution Story in the video below.

Congratulations to Jamie on this well earned promotion.