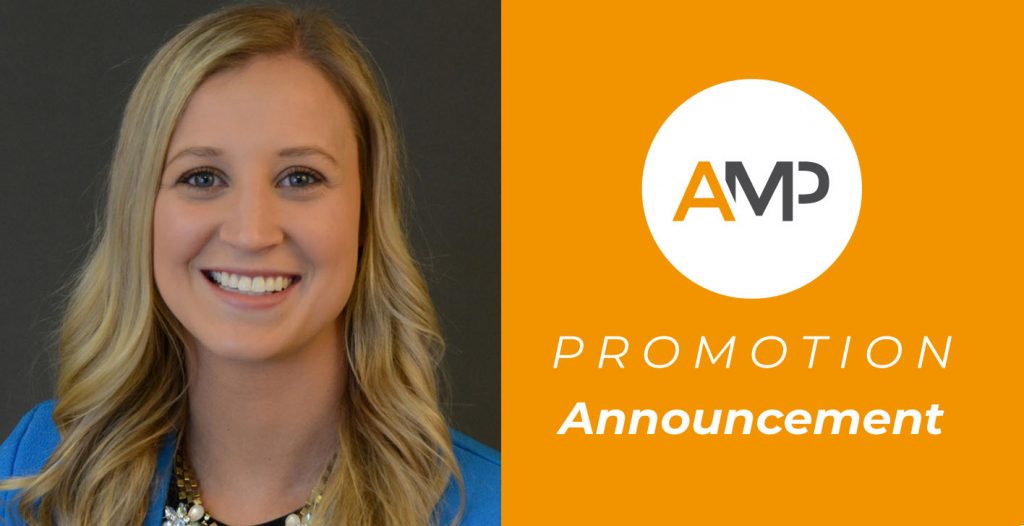 Congratulations to Ashley Schwartz on her promotion to Assistant District Sales Manager in our inside sales Schaumburg district!

Ashley started at AMP with little sales experience and actually never thought she would “be in sales”!  She chose AMP because, despite her internal apprehension, she was told by many of her family and friends that she would succeed in sales.  Alex Hogan recommended Ashley to the Schaumburg team and Ashley decided to take a leap in sales after her first round interview with Nikki Bowman.

While at AMP Ashley has had an impressive career!  When she was promoted to Account Manager she set a record achieving 76.5% renewal rate from her first month managing accounts!  Over her career, Ashley has compiled multiple months with a renewal % in excess of 80%+ and finished February, 2019 with her biggest sales month to date.  She sold over $51,000 last month (she was only here 17 selling days), including selling over $20,000 in one week!  Ashley finished 2018 as one of the top revenue producing Account Managers in Schaumburg.  She averaged over $37,600 in sales each month with 77.56% POS!  Ashley earned a spot in the top 10 rookies her first year at AMP and is a two time Distinguished Sales Award winner.

In Ashley’s spare time she enjoys sports and anything active. She is well known in the Schaumburg office as a fitness enthusiast!  Throughout the year, you can find Ashley playing indoor and outdoor soccer, volleyball, and softball.  Ashley also loves to wakeboard and snowboard.  She even made an entrance to her wedding on a wave runner wearing her wedding dress (picture attached!).  Ashley and her husband Kevin (her high school sweetheart) bought their first home a little over a year ago in Hainesville, IL.  Ashley and Kevin are saving up to build their dream house on the lake!  In their spare time, Ashley and Kevin enjoy traveling.  Ashley and her family love to snowboard and she recently got back from a snowboarding trip in Utah!  They even named their cat Skylar nicknamed “Sky” after a snowboard trip to Big Sky Montana.  If not snowboarding, Ashley loves to travel to warmer places.   She enjoys visiting family on the east coast (Dad in NC, brother in DC, or cousins in Nantucket), or a trip to the beach!

Congratulations Ashley on your well-deserved promotion!