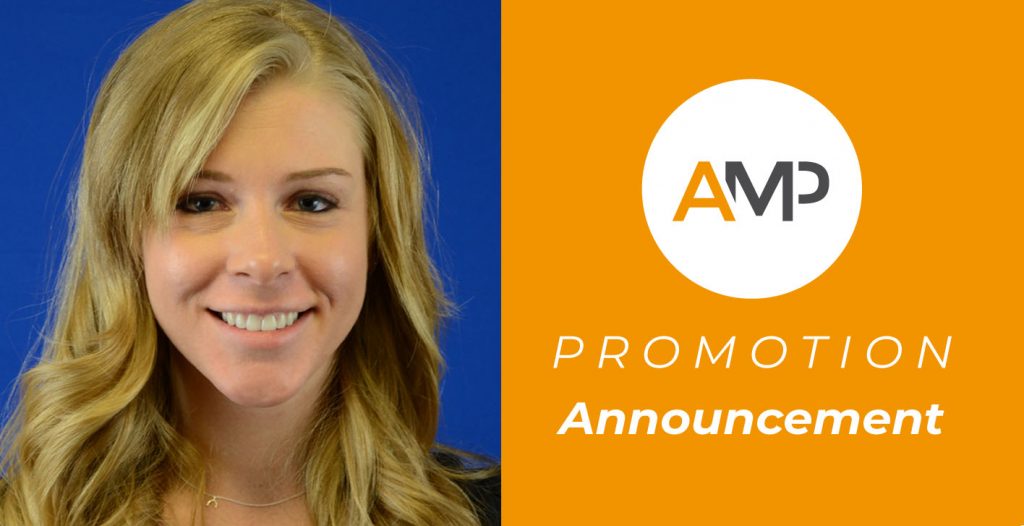 Congratulations to Breanne McGarvie on her promotion to Regional Account Manager – Schaumburg!

In this newly created role, Breanne will be continuing her work as an OPTIMA™ Account Manager with the added responsibility of working with our large and multi-location OPTIMA™ customers.

Bre started her career with AMP in April 2016 as an Account Manager in Schaumburg.  She was instrumental in the early growth of Schaumburg quickly becoming one of the top Account Managers on the team and then promoted to Senior Account Manager at the end of her first year.  She was a top ranked rookie her first year and won her first Distinguished Sales Award.   She won her 2nd DSA in 2017 increasing her renewal rate to 65%.  Third time’s a charm as Bre won another DSA in 2018.  She was again one of the top Account Managers finishing last year with over 75% renewal rate of her OPTIMA™ customers.   She set a company record in July, 2018 that still stands as best overall renewal % for a month – 88.2.  Bre earned her first Leadership Summit Trip in 2018 and will be headed to the sandy beaches of Cancun in a few short weeks.  She set a department renewal % record in July with over 88.2% renewal rate!

Prior to joining AMP, Bre worked several different roles and spent time serving at multiple restaurants.  Bre joined AMP wanted to start a career that she could be proud of.  She wanted to do something that scared her and would push her to grow. Bre actually met Lauren Kovacik at a church group which is how she found the company!

Bre put herself through college and just finished paying off $75,000 worth of student loan debt!  Bre loves to travel and has visited Germany, Spain, Rome, and France.  She set a goal to learn Spanish and practices it daily!  Bre’s short term goal is to save money for real estate investing.  She has a dream to flip homes with her boyfriend, Dave.  In Bre’s spare time, she loves to exercise and her favorite exercise is rollerblading.  She enjoys going to festivals like Electric Daisy Carnival and Lollapalooza.  Bre loves spending time with her mini me, her 10 year old rat terrier, named Bizzy.