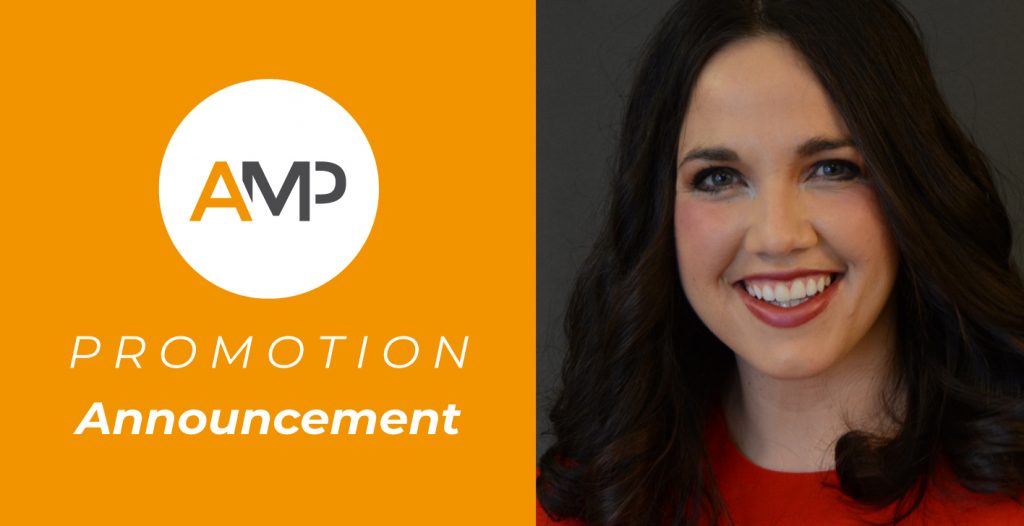 Congratulations to Ashley Fawkes on her promotion to Vice President of Sales for Digital Services!

Ashley’s promotion is a truly unique story. Usually, when someone is promoted it’s into a new role to fill a need in a particular already existing part of a business. Ashley created her new title and her promotion by building her own AMP business effectively from the ground up. Under her leadership and influence, the Schaumburg office has grown to the size of all our other sales regions. This is the culmination of years of hard work, dedication, passion and persistence.

Ashley’s first efforts to building up a Schaumburg account management and sales team actually happened in the office right next to me in DeKalb. At the time, our ability to sell new OPTIMA™ over the phone was unproven, and Ashley’s first order of business was learning and achieving personal mastery by doing exactly that.  She tackled that work, making hundreds of cold calls on non-customers. I had the honor of hearing Ashly get hung up on. I listened to her work hard and maintain enthusiasm on some days when she made no sales. And gradually (because the walls in my office are thin and Ashley is a loud talker!) I overheard Ashley starting to figure out the pitch and make sales. In fact, in her first 4 days, she made 7 OPTIMA™ sales and sold 2 new customers.  Ashley took that solid, growing understanding of how to make new sales to Schaumburg, where her combined mission of providing exceptional client service with a strong and directive sell to help mindset took over the Schaumburg team. The history since those early days is nothing but an unbroken line of growth, continual improvement, and team accomplishment!

Ashley started her career at AMP as a First In Rep in June of 2010, after she graduated  from Augustana College. She earned a degree in Business Administration with concentrations in Marketing, Management, and Finance and a minor in Communication Studies. While at Augie, Ashley was heavily involved on campus and served as the President of her sorority and oversaw the Augustana Phonathon Program (her first experience with inside sales).

Her first project in LaSalle/Peru, Il. Not surprisingly, she finished two weeks ahead of schedule. Ashley was promoted to Senior Sales Rep (called a Territory Closer way back then) and worked several successful projects: Spring Valley, Ottawa & Channahon.  Over her first three months, Ashley averaged $22,718 in sales per month. Ashley’s final efforts in the sales field was in the successful launching of our DeKalb HomePages® Directory. She totaled 79 new accounts in just under 6 months of selling in 2010. She was building a reputation as a low-drama, high performance team member, with a consistent record of taking on challenges and turning them into successes.

When a position on our recruiting team opened up, Ashley saw it as an opportunity to take a risk and grow. She joined Recruiting as a Hiring Manager at the end of 2010 and earned Hiring Manager of the Year in 2011. That year, she earned  the prestigious Million Dollar Club as her hires generated over $2 million – a record at the time for annual contribution!  Based on her success and desire to inspire others, Ashley was promoted to Assistant Department Manager and then 6 months later was asked to lead the Recruiting Department.

When you visit the Schaumburg office today, all of those tremendous personal and AMP-honed qualities that Ashley has developed are reflected in the incredible team of individuals in that office. In fact, you’re likely to hear Ashley on the phone, working with a rep or developing sales strategy related to new processes or projects, the same way I did four years ago through the thin walls of my office. As unique as Ashley’s story is, it’s a path that expresses the ambition, dedication, commitment to internal promotion, hard work, steadiness, and personal development that characterize what AMP aspires to provide to everyone here. We couldn’t possibly be prouder to announce Ashley’s promotion to Vice President.

When she’s not working, Ash enjoys spending time with her husband Tom, who recently joined the St. Charles Police Department (that’s good for Chad and Abe) and their adorable daughter Adelyn (5) and spirted son Eli (2.5). In her limited spare time, she enjoys time with her big family. She’s the second oldest of 7 children! Ashley is looking to rebound next year from being on the last place volleyball team in her neighborhood.

Congratulations again Ashley.  It remains a great honor and privilege to work for you!