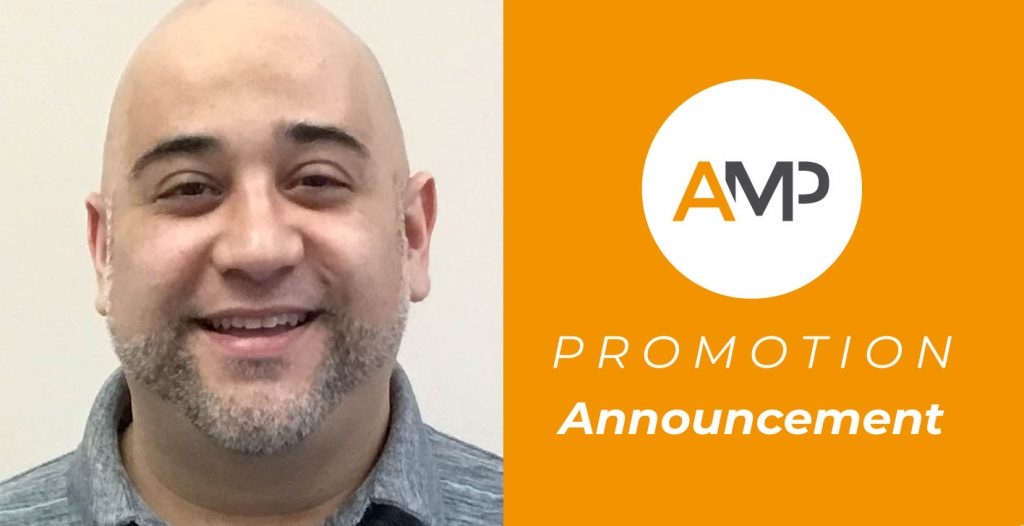 Congratulations to Carlos Paz on his promotion to Digital Assistant District Manager!

It feels like just yesterday that we were sending out a promotion announcement for Carlos. Since being promoted to Senior Sales Representative, “LOS” AKA “The Paz Dispenser” continued to impress and earn the respect of everyone here at AMP! Many have heard Carlos give great advice on morning success calls or have been positively influenced by him through phone coaching. Carlos talks the talk and walks the walk. He earns this promotion coming off of one of his best sales months with AMP. In October, Carlos led the South Chicago market in overall digital revenue ($26,925), and total OPTIMA™ sales ($17,020)! Another sign of consistency is averaging more than one sale per day, and Carlos did that in October totaling 25 separate accounts. The way he’s able to do this is through high call volumes and not prejudging. Truck stops, home based, industrial, you name it, he doesn’t hesitate to unlock opportunities.

The commitment to our sales structure, training manual, and consistent growth is what has made Carlos an expert in “AMP 101”. Seeing the organization and outstanding sales skill-set that Los has developed in a short period of time is one thing. What Carlos does to better himself when eyes aren’t on him makes this decision even more obvious. He is consistently putting up sales after 5pm during the week and making multiple sales during the weekend. That is the type of hard work and great character that is required to be in a leadership role here at AMP. Hours don’t apply for sales success. He just goes until the work is complete.

District Manager, Raphael Weaver, has done an excellent job getting Carlos prepared for this promotion. When we asked Raphael to describe what Carlos means to South Chicago, he said “Carlos is such a team player! He’s organized, disciplined, and exemplifies the hard work that’s required to be successful. I am so proud to work for Carlos! He is driven to crush goals and is all-around a great guy.”

When Carlos isn’t inspiring local merchants to partner with AMP, he’s spending time with his family. He jokingly describes himself as “a father of three, boss of none”. Carlos likes to read in his spare time, but he really loves spending time with his boys: PD (Peter David), Abercio, and Marcario. Their mother Isabel, AKA “the boss” according to Carlos, is a great support and fan of AMP. They are all rooting for Carlos and looking forward to seeing his success continue, as are we.

We can’t wait to see the even bigger impact you’ll have as a new member of the management team!

Congratulations Carlos on your well-earned promotion!