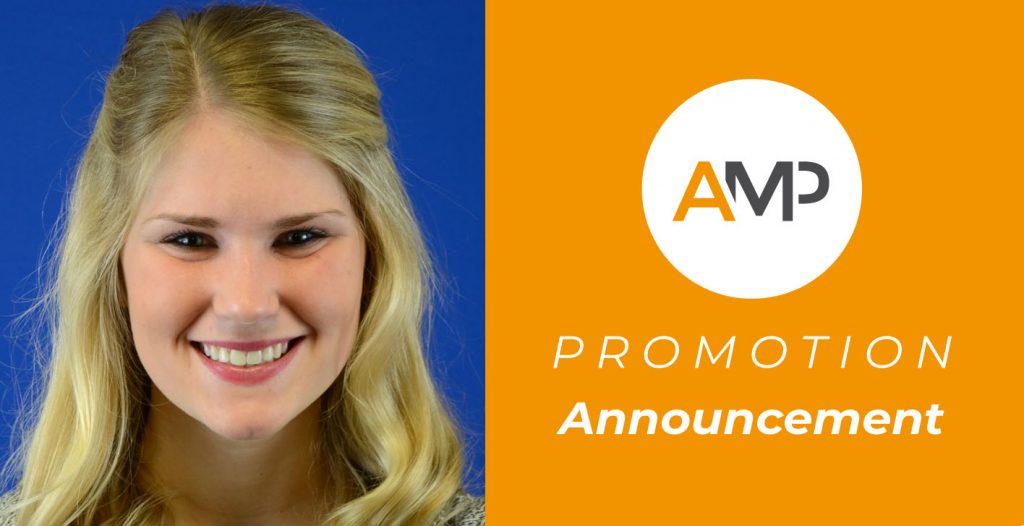 Congratulations to Taylor Ward on her promotion to Schaumburg Inside Sales Manager!

Since joining AMP, Taylor has had a truly impressive career!  Over the last three years, Taylor has earned Inside Sales Rep of the month over a dozen times.    She has set and still holds numerous Schaumburg team records during her tenure including the record for most sales revenue in one day, most sales revenue in one week  and for the highest total sales in month! Taylor has since exceeded $60,000 in sales eight separate months this year including becoming the first rep to sell over $80,000 in a single month which she accomplished in June of 2019.  In both 2018 and 2019, Taylor led all of inside sales in monthly revenue.  In 2018, Taylor averaged a record $47,000 in sales per month.  Taylor didn’t settle there.  Even as an ADM in 2019, while spending her time leading and developing a team, she averaged over $58,000 in sales per month.  Last year, her hard work culminated in her being recognized as both Inside Sales Rep of the Year and Best in Sales.  In just a few days, you’ll see her on stage and will be enjoying a tropic destination with other AMP leaders this spring.   Taylor’s work goes beyond her personal accomplishments of all her accomplishments she’s probably most proud that she has worked with and developed four of the Top New Rookies in the organization from 2019.

More evidence of Taylor’s leadership by example mentality happened last year.   The AMP mission was “Evolution”.   In Schaumburg, that meant the growth of NDR (New Digital Revenue).   Taylor made it part of her mission, too.  She lead the team in NDR on the year with over $70,000 which was a record for the division.  She also set a team record in October with $18,075 OPTIMA™ NDR.

Taylor’s peers view her as a positive, hardworking talented sales individual who is always pushing herself and inspiring others around her.  Taylor created the Monthly Best Club, Mentorship Program, and is a consistent leader in all aspects of our business.

At a very young age, Taylor learned an appreciation for small business ownership watching her dad, uncles, and grandfather start and manage their own small businesses in the western Chicagoland suburbs.  Like many at AMP, she had little formal “sales experience” prior to coming aboard.  Taylor did gain very valuable life experience in numerous role prior to AMP.  In college, she worked as a leasing agent for a local apartment complex selling open vacancies to future tenants.  She gained some sales experience as the New Product Development intern for Sage Products, a Medical Device Company.  Taylor also worked at Lou Malnati’s in Crystal Lake as a hostess in the summers.

In Taylor’s spare time she enjoys exercising, traveling, spending time with her multiple circles of friends, and very large extended family! Taylor lives in the city of Chicago with her high school sweetheart, Jake.  On weekends they enjoy city life and traveling.  Taylor is a certified scuba diver and has gone scuba diving in Australia, Mexico, and Punta Cana!  She just got back from a family ski trip to Breckenridge, Colorado over the holidays.  Taylor’s 2020 travel itinerary includes Cabos San Lucas, London, & Arizona!

In Taylor’s new role as Inside Sales Manager, she will lead and continue to grow our Schaumburg OPTIMA™ Account Management team.

Congratulations Taylor on your promotion!