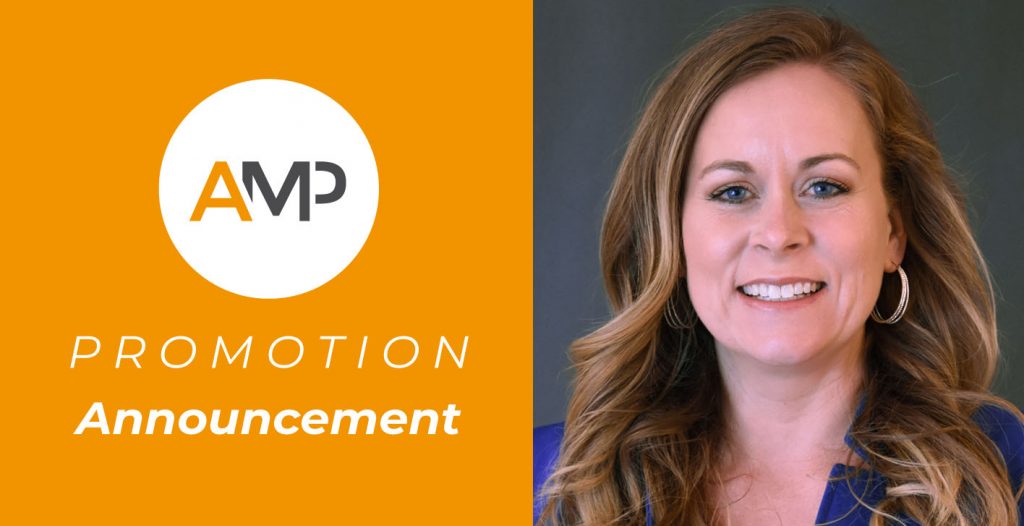 Congratulations to Jamie Heymann on her promotion to Iowa Regional Sales Manager!

Please join me on congratulating Jamie Heymann on her promotion to Iowa Regional Sales Manager.

Jamie’s nearly ten years with AMP have made her a well-known and highly regarded leader here.  She joined us June, 2010 after interviewing with Steve Ruckdaschel at a Starbucks, and took on work in new business development in a HomePages® expansion town.

Surrounded by good people, Jamie beat back an early, days-long inclination to quit AMP and to abandon sales entirely as a career.  Instead, she buckled down, got organized, stayed focused, and worked harder.  Those efforts, and the joy that Jamie began to feel in closing sales and helping small business owners, began to distinguish Jamie’s sales performance.  In Eastern Iowa, Jamie first earned promotions to Senior Sales Rep, then to Assistant District Manager, and then Field Trainer. Three years after she joined AMP, when we needed a capable individual to run our small, three person Nashville, TN marketplace, Jamie saw a good opportunity and with the support of her family, Jamie moved seven hours from the community she grew up in to take on that District Manager job.  It was a state where Jamie, her husband Brian, and their three children had no family or other friends, and that first big, brave, exciting decision to move to step into a leadership role became a defining one in Jamie’s career trajectory.

Jaime built that Nashville market into a successful HomePages® territory, and then into the first District in the history of AMP to achieve $1 Million in district digital sales.  Her time in Nashville was distinguished by Jamie winning the coveted Field General Award in 2016 and by the development of a TN team culture that developed strong sales people and that cultivated great results, among them our 2017 Digital Rookie of the Year, Lorri Allen, and the 2016 Rookie Rep of the Year, Joy Collins, who succeeded Jamie as DM and who today runs one of the highest selling Digital Districts in all of AMP.

Jamie was promoted again in early 2019, after moving back home to the Quad Cities.  It was another entirely new role for Jamie, one with companywide strategic implications, and Jamie excelled at it.  Jamie worked as AMP’s first ever Corporate Digital Training Manager this past year, and in that capacity she re-designed and standardized our Classroom Training for GSV, for OPTIMA™, and for CloseBy® Text.  Then she delivered that training, repeatedly, both in the classroom and in the field one on one with new and veteran reps.  Jamie spent 2019 as a true road warrior, traveling overnight 3+ days per week, and sometimes driving 4, 5, or 6 hours to present classroom training to new trainees, or to then grab a cup of coffee, jump in a car with a rep, and make 8 hours of field sales demonstration customer calls.  Her hard work and willingness to DO the work that distinguishes AMP had a singular influence on the double digit digital sales growth that was achieved by the company in 2019.

Throughout all of these roles – sales rep, Senior Sales Rep, ADM, Field Trainer, District Manager, Digital District Manager, and Corporate Trainer, Jamie has demonstrated tenacity, good judgement, and an unwillingness to do things halfway.  She’s been a powerful force in the lives of people she’s worked with, and excited about the huge impact she’ll have on Iowa, developing managers, reps, directories, digital revenue, and the trajectory of the entire Region.

In a way, this role is a homecoming for Jamie, having grown up at AMP in the same markets she will now lead, having worked as a rep and ADM for Whitney Phelps, the outgoing Regional Manager who she succeeds in this role, and after benefitting over the entire course of her AMP career from the guidance, wisdom and experience of West Region VP Steve Ruckdaschel.