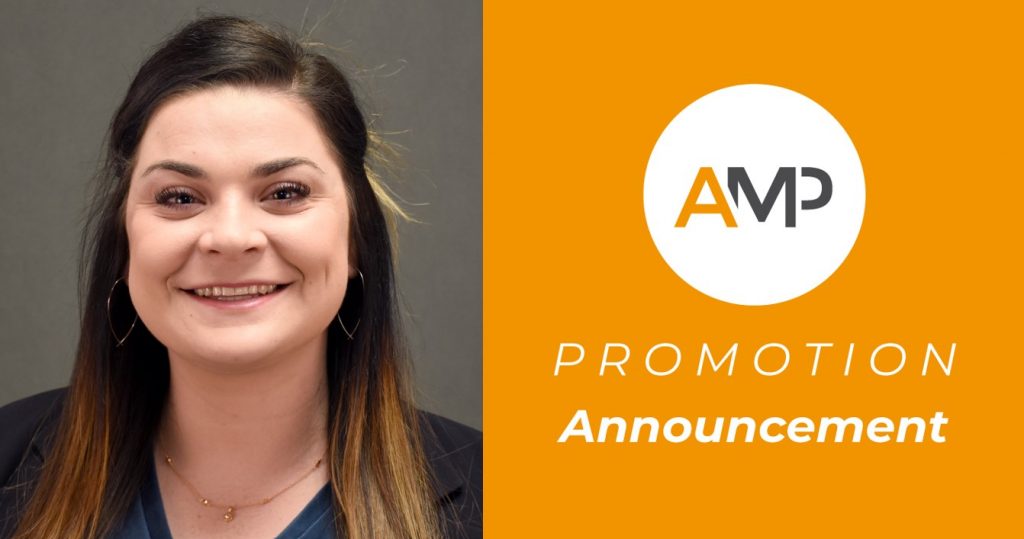 Raegan joined AMP in September 2017, shortly after she graduated from the University of Wisconsin, Parkside.  She started as an OPTIMA™ Account Manager Support Specialist – a newly created role with her #1 priority being to upsell our OPTIMA™ customers into larger programs.  Prior to Raegan joining the Schaumburg team, the team would high five when five upsells were sold  in a month.  Raegan took the leap of faith and made upsells “her one thing”.

Raegan stepped out of her newly cemented comfort zone about a year later becoming an OPTIMA™ Account Executive.  She worked on managing many of our most tenured customers and averaged over 10+ NDR accounts per month while also averaging an 85%-90% renewal rate.  Fast forward to the present day and to consider the ramifications of her work, double-digit upsells is the monthly norm for all members of the team.   Somebody had to show it was possible!

It was decided that the next step on Raegan’s evolutionary AMP journey was as in the more traditional Account Manager inside sales role.  She rolled up her sleeves to start prospecting, a requirement to become an OPTIMA™ Account Manager.  A good note for anyone reading this who might be unsure of herself, Raegan said in her interview she didn’t think she could ever do cold-calling.  She pushed herself often leading the team in calls made and got hung up on hundreds of times to achieve goal and requirement of acquiring new customers.  At the end of December 2019, Raegan earned the Senior Account Manager role.

While Raegan’s path at AMP is not as traditional as many others, she has continued to take on more responsibilities and has consistently pushed herself out of her own comfort zone.  Raegan is known for taking on many different projects thrown her way including traveling to Iowa spending days with new hires to help the start-up of our Iowa inside sales office.   Raegan is respected and adored by her peers in the Schaumburg office as she is always eager to help others on the team.

In Raegan’s free time, she enjoys playing summer softball leagues.  Raegan’s love for softball started early on in life and she continued to play in college.  She likes staying committed to self-improvement and works out regularly with her personal trainer, Kieran.  He’s tough!  Raegan enjoys visiting family in Arizona as much as possible and spending time with friends in Wisconsin.  She loves cooking and spends a lot of time on Pinterest Sunday nights meal prepping for the week.  Raegan has the cutest cat that she adopted last year named Hera.  She recently purchased her first home in Algonquin!

In Raegan’s new role as Digital Inside Sales Classroom Trainer, she will spend time in both the Schaumburg and Coralville offices training brand new sales representatives as well as working with the OPTIMA™ Account Management team.

Congratulations, Raegan, on this well-deserved promotion!