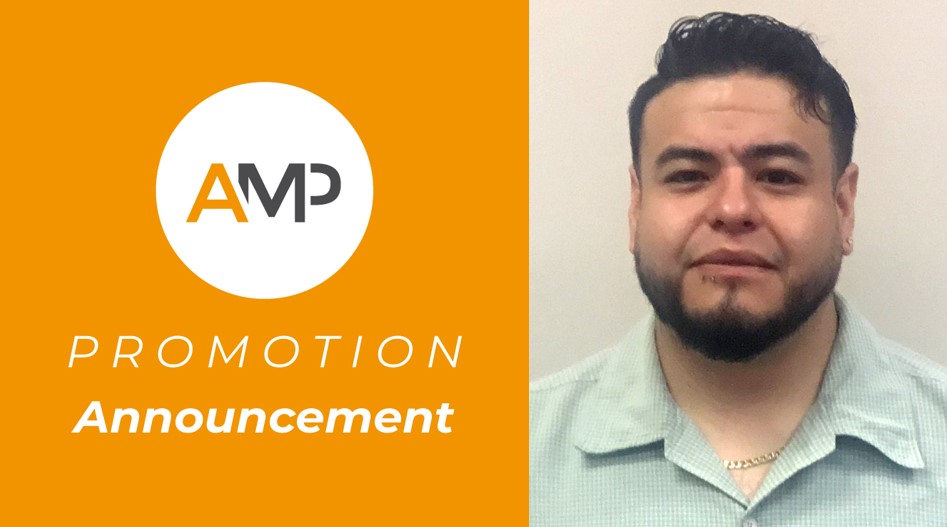 Congratulations to Juan Almaraz on his promotion to Mentorship Manager for the South Chicago Digital Market and the Central Region!

Juan joined AMP on September 17, 2019 after working in the restaurant industry for several years. Juan managed a top performing Panera Bread location, working his way up into management due to his leadership skills and hard work. Prior to working in the restaurant industry, Juan worked for Motorola and Circuit City where he learned a lot about technology and mobile devices. The experience gained throughout Juan’s work experience helped propel his career here with our AMP family. Juan is very proficient with our Sugar CRM. His discipline with client entries, notes, planning and all the sales collateral he uses has played a strong part in his top AMP Rookie Rankings. Combined with the character that Juan has: he’s one of the most humble, appreciative and genuine individuals that you’ll ever meet. That’s saying a lot as our AMP is chalk filled with the humble juggernauts of the business world. This DNA make up of Juan is also why his customers absolutely love working with him. Be relentlessly helpful in the most genuine way and success will beget success in the world. Through hard work, Juan has mastered three languages, which is a huge asset in itself. He’ll go the extra mile in helping his teammates translate and our digital sales specialists communicate with businesses owners who are more fluent in one of the languages. Juan even rewrote the OPTIMA presentation in Spanish for us. Pretty amazing!

Early on, Juan’s name evolved from Juan to “The Don” as he sped through his GSV onboarding in less than 8 selling days! Juan quickly embraced Premium Optima and has consistently been one of the top Optima sellers in the entire company. November 2019, Juan led the entire organization in digital sales with over $26,000 in total digital revenue. More recently in August 2020, Juan inked in $17,290 in total digital sales and his product diversity has only continued to grow. Premium OPTIMA mastery and getting really good at ‘One Thing’ opens up doors for all other things and flat out simplifies it. His early success landed him in the top 5 of our AMP Rookie Ranking Report and in our AMP Top 40 Ranking Report.

When Juan joined AMP we all knew that there was something special about him. From first introduction Juan leaves a lasting impression and his passion for life resonates. Juan has always been an excellent communicator and always expressed his goals knowing exactly where he wants to go with AMP. He never settles. He pushes himself and his CentralStrong teammates to be stronger each and every day. Juan dials into every morning success call to learn from his amazing AMP peers. He pays very close attention to detail and always knows where he ranks in our elite AMP Ranking Reports amd also knows where his teammates are (friendly competition never hurt anyone). Knowing is one thing and then honing in on one specific metric and choosing to become better not bitter has propelled Juan to where he is today! Always growing, never eroding.

Family is very important to Juan, it’s his WHY and it’s his everything! Juan is championed on and off the playing field by his amazing wife, Diane and their beautiful little angel daughter Yurii. Yurii is a true princess as she has Juan under her magic spell and wrapped around her fingers. He absolutely adores her, it shows every time he speaks Yurii’s name. You likely have even heard Yurii chiming in on a morning success call. Notes in one hand, Yurii in the other and both instilling knowledge and love for family to the masses. We love it and Juan loves that AMP is truly about family and living our very best lives.

We’ve seen the incredible sales performance individually and what can happen when Juan expands his sphere of influence to teammates. I’m excited to see what Juan does in this new role and we know there will be nothing but great things to come from it.

Congratulations, Juan, on this well-deserved promotion!