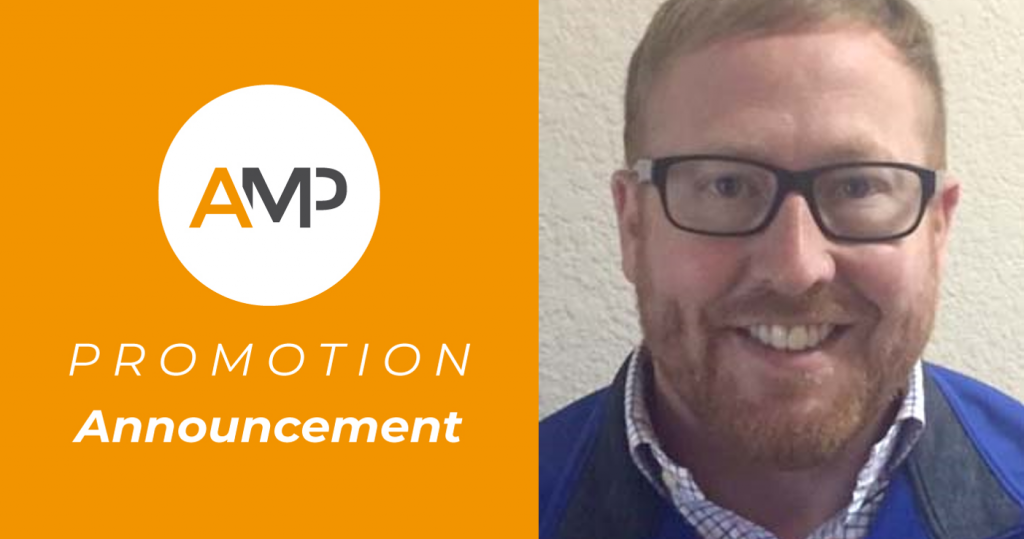 Congratulations to Eric Sauld on his promotion to Market Expansion Specialist!

Before joining AMP, Eric ran several Family Video stores as a district manager, but due the change in the industry he was left to look for another opportunity in sales. What very few at AMP probably know about Eric, during this time he was also making a name for himself as a rapper working weekends and evenings dropping his beats on stage. Shortly after leaving Family Video, he worked as a customer service/sales rep at J.J Keller (selling compliance products) working in inside sales. Although he excelled at the work, he didn’t feel passion for compliance products so he continued his career search and we are lucky he did! Eric joined AMP in September of 2019 assigned to his first market of Green Bay WI.

If you’ve ever had the good fortune of speaking with Eric or if you’ve tuned in on the Morning Success Calls or regional Zoom meetings, you’ll hear the passion he has for small businesses. Eric grew up in Upper Michigan. He was an active kid with a large blended family. His mother & step-father opened up a diner in his small town and he spent time working for them growing up. Despite their hard work and great food, they struggled to keep the doors open and eventually closed down. Eric knows firsthand what it is like to struggle as a small business owner and fuels that energy to help in every stop and interaction he has with local merchants.

Eric’s evolution in digital had him joining the ranks of our highly skilled & influential Mentorship Team and before the end of 2019 he was assisting with first day training starts. With a drive to improve each week, he successfully completed his first project of Green Bay WI at the end of the year including his personal best of 18 GSV sales in November, 2019.

In 2020, Eric returned from lockdown with big goals! In July, he set out to beat his personal best. He declared, “My goal is to hit $15,000 in sales for the month. I will work all night and Saturday too if I have to hit this goal.” By the end of the day on Friday Eric was about $500 hundred dollars short, so he worked all day in the field on Saturday to commit to his goal. On the Saturday before the month ended, he sold two accounts totaling $1,150 and securing his all-time highest sales month up to that point of $15,685, including 9 new Optima!

Eric has shown his commitment & leadership by always working golden hours multiple times a week, and working hard on weekends to push through his monthly sales goals and bonuses. His commitment to improvement pushes him to be better each day, every month. In September of 2020, Eric was promoted to Senior Sales Rep/Digital Market Mentor for the Fox Valley team. He spent 10% of his time working with teammates and helping them evolve at our work while successfully securing sales in his own territory 90% of the month.

In the months to follow, Eric became even more consistent in his own personal evolution too. He finished the last quarter of 2020 averaging over $15k in sales with 8 OPTIMA/Text per month which was $11,716 in OPTIMA/Text per month. In fact, his sales month of December 2020 was his new personal record tallying $16,807 in sales. If you look back at Eric’s tenure, that’s exactly what you will see consistent month over month evolution and improvement. He’s a true testament to BBTY.

Outside of work, Eric spends a lot of his free time with family – wife Amadiris and 20 month old daughter, Mila. He’s a social being and enjoys spending time smoking meat and hosting BBQs for his friends & family in the Appleton WI area. He’s passionate about sports and is an avid runner. Eric has completed a number of half marathons but his ultimate goal was to finish a marathon. What’s fun about his first marathon is that he tied his “Why” to the completion of the race. At the finish line, which was at Lambeau Field, Eric proposed to his now wife, Amadiris. Fast forward to the new year, Eric and Amadiris have fitness at the top of their list for their family goals & have recently purchased a Peloton bike as a means of holding each other accountable to fitness and good health as an example for their daughter.

Congratulations, Eric, on this well-deserved promotion!