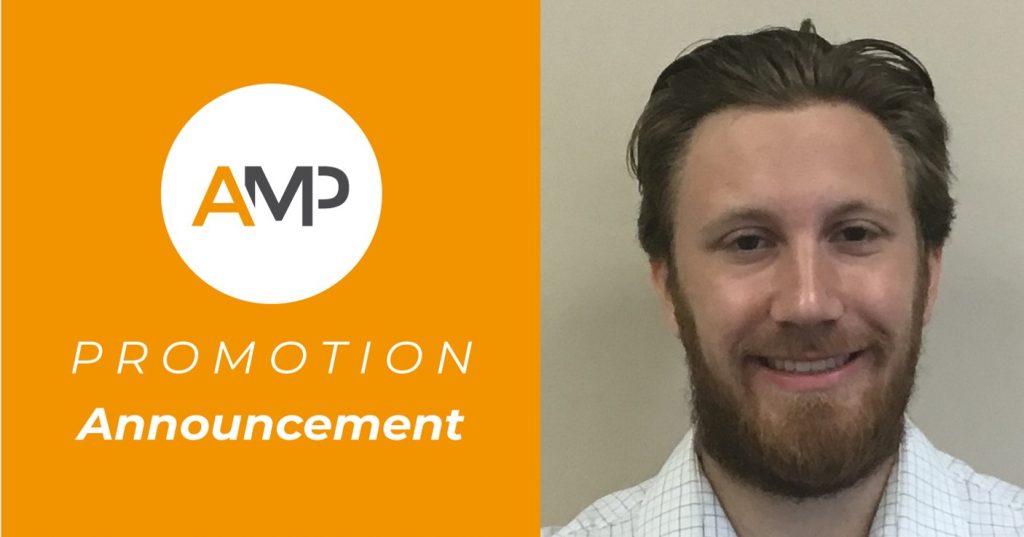 Congratulations to Robbie Schwert on his promotion to Mentorship Manager — Central Region!

Balloon Hands as we call him joined our AMP family on July 7th, 2020. It was right after the 4th of July holiday weekend, Robbie made a quick impact and his name was seen quite frequently on the Central Region’s daily WhatsApp chain. Robbie completed his GSV on-boarding requirement in his 1st 2 weeks in the sales field by selling 9 GSV and 2 OPTIMA™. He had 2 OPTIMA™ sales under his belt prior to being officially trained on OPTIMA™. Worth mentioning, Robbie finished the month with 82% POS. I remember being out with Robbie in his territory when he only needed 1 more GSV sale to complete GSV on-boarding and he didn’t want to go home, he said that we are staying out until we get 1 more GSV sale and we did, his 8th GSV sales came in after 7:30 PM and we gave each other a high five and Robbie said I’m ready for OPTIMA™ training. Seeing that drive, determination and commitment to success 1st hand and early on, we knew that Robbie was special and would be very successful and a future leader within our organization. On August 5th, Robbie was promoted to the Elite Mentorship Team. Robbie earned his promotion to this elite team of leaders in less than 30 days with AMP based on his early success in the sales field, his professionalism and quick adaptation to following the AMP system.  Robbie quickly adapted to the mentorship team role, consistently making sales on mentorship days and showing candidates what a day looks like as a successful AMP sales professional.

Robbie is self-motivated and a true student of the game. After being trained on OPTIMA™, Robbie turned his attention to being a top OPTIMA™ seller in the company. He not only pitched OPTIMA™ daily in the sales field, but every night he was on AMP university studying to hone his skills on OPTIMA™ and Text. In the month of October Robbie sold 10 OPTIMA™/Text accounts for $14,365 ($16,205 total sales) and followed up in November with another outstanding performance 8 OPTIMA™ accounts for $14,049 ($16,904 total sales).  Robbie is a natural at building rapport, telling stories and asking for referrals. Everyone who has gone out in the field with Robbie has learned from the way that Robbie uses bandwagoning, storytelling and asks for referrals. His customers absolutely love him and they light up with joy when he walks into their business.

Robbie has a tremendous work ethic and he has made a name for himself in his short tenure with AMP, but what really stands out about Robbie is his soul and character. He is mature beyond his years at 23! There are so many adjectives that can be used to describe Robbie, he is professional, sharp dresser, humble, helpful, respectful, super intelligent, funny and has an incredible work ethic. I learn something new every time that I go out in the sales field with Robbie.

Robbie is a competitor, he competes against himself every single day to be better than he was the day before. He got that competitive drive from playing baseball as a kid and from his dad who played professional hockey for the New York Rangers. His mom is a graphic designer and a small business owner. Fun Fact about Robbie: The apartment building that he lives in is called The Optima Building! He was clearly made to be an AMP superstar!

Outside of work, Robbie is an avid reader, he reads books and listens to podcasts. Some of his favorite books are Rich Dad Poor Dad,  How To Win Friends and Influence People, and Friendship Factor. When Robbie is not reading or out networking, he enjoys playing Frisbee golf, traveling and sports betting. People that know Robbie at work and outside of work would describe him as an outgoing person who has the gift of gab! Robbie finds joy in influencing and helping as many people as he can and he is committed to giving back to those who are less fortunate.

Robbie, we are fortunate to have you in the AMP family. Congratulations on your early success here and keep charging ahead because you have a very bright future!!

Congratulations, Robbie, on this well-deserved promotion!