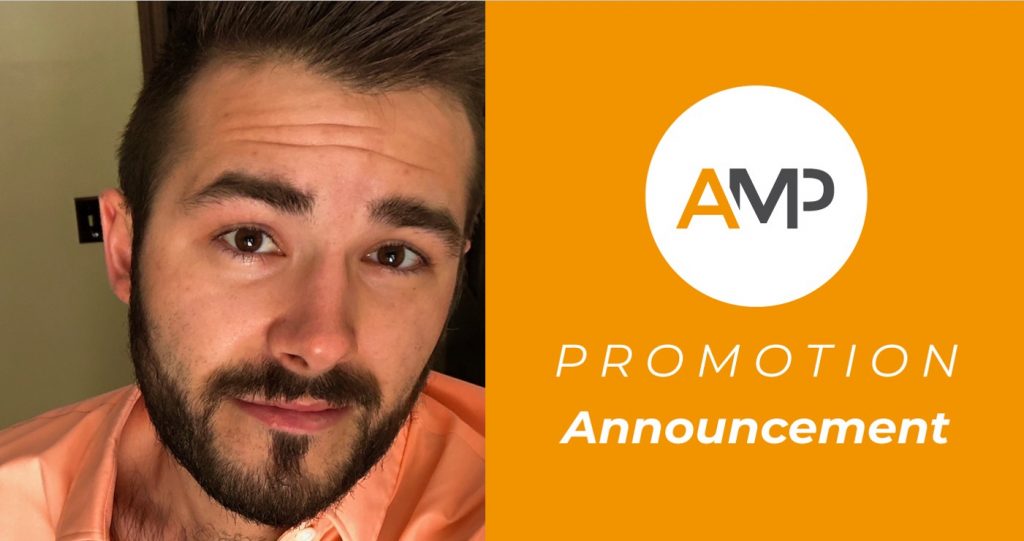 Congratulations to Devin Stukel on his promotion to Mentorship Manager!

In his new role, Devin will be training and developing his teammates throughout the Central Region at least twice a month! Devin’s ascent in his AMP career was unique as there were extra curve balls and adversity thrown at Devin from day one. We were impressed with his ability to push through and never waver in his belief of AMP and the incredible impact we make on our clients.

Devin started with AMP on March 17th, 2020. I’m sure this isn’t news to anyone, but the statewide shutdowns due to the global pandemic started almost immediately after March 17th. After Devin completed training class, he started out strong with three GSV accounts in his first three days of sales! Then the shutdown hit (womp womp). During a time when other people may have bowed out of a new career path or sought other opportunities, Devin chose to bear down and utilize this time to connect with business owners and master his AMP training. He completed AMP University assignments, gained product knowledge, and prepared for the outside sales career he knew was coming soon. As soon as the state of Indiana allowed businesses to open their doors back up, the flood gates opened for Devin. His almost surgical approach to working his first project of Granger/Mishawaka, IN birthed his nickname “Doc Stukel”.

Doc Stukel quickly proved he was capable of doing great things in the sales field, and earned a promotion to the mentorship team- the group that conducts ride days and identifies talent as part of our interview process. In that role, he once again showed how amazing he is at inspiring people (candidates and business owners alike). His goal is to help as many people as he can and having an impact on our future employees was a big motivator for him. Shortly after that, Devin sold his 20th Optima/Text sale and earned his Senior Sales Rep promotion, launching an even bigger financial opportunity for him to conquer.

Getting to know Devin, we learned more about his family history which is an incredible story in itself. His strong character, determination and positive attitude can be connected to his grandmother. She was an amazing person that started with nothing but a dream to create a life for herself and her four daughters. As a single parent, she moved to the United States and created success out of thin air and poured her infectious positivity into everyone she encountered. She is one of the big motivators for Devin, and we know he makes her proud everyday!

Outside of work Doc Stukel is very adventurous, so it’s no wonder that he enjoys outside sales. If he’s not inspiring small business owners and helping them succeed, you can find Devin hiking or camping around a bonfire. He enjoys being active in all aspects of life and enjoys game design, dancing, and cooking in his spare time.

Devin has big aspirations and is always looking to continue to grow. I asked Devin about his career goals and what he likes about working at AMP and this is what he had to say:

“My favorite thing about working for AMP is seeing the effect of my efforts pay off by creating success for local business. That moment an owner thanks me personally for helping them with their business and truly appreciates all I have done by investing in them creates a beautiful relationship and trust between AMP and their business. My goal is to develop myself further to become the best leader and teacher so that I can spearhead a new region and build up a vast network of clients and create more job opportunities. I have the ability to not just develop the face of the company and its outreach to the Michiana area, but also create opportunities for others to achieve their own personal hopes and dreams.”

These are the words of a leader that is thinking big picture, and a perfect example of a mentorship manager. Selfless, driven and appreciative of every opportunity he is provided.

You earned this promotion through your great leadership and determination, Devin! We are proud of what you’ve accomplished and look forward to seeing you thrive in this new role!

Congratulations, Devin, on this well-deserved promotion!