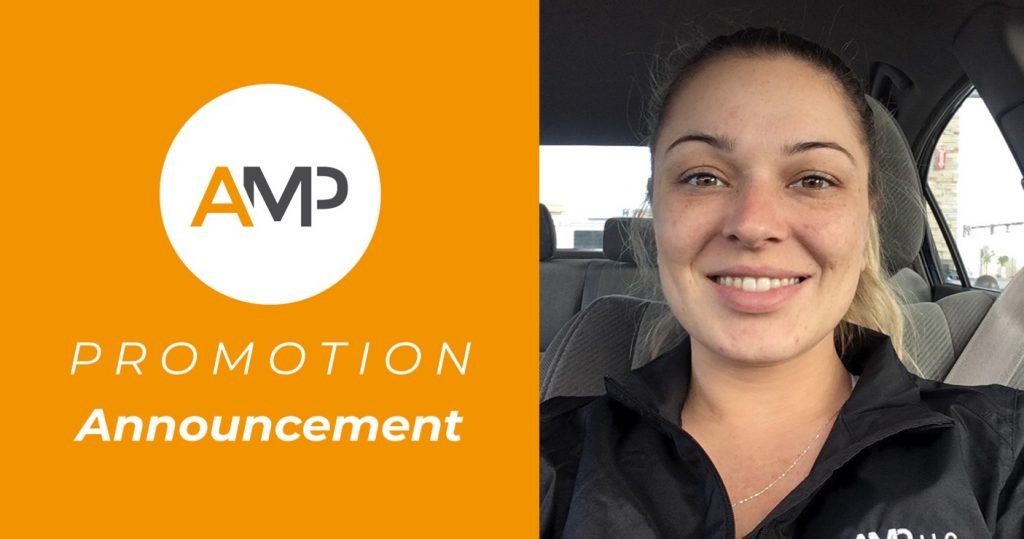 Congratulations to Rachel Cedroni on her promotion to Digital Mentorship Manager for the Florida Digital District!

I am pleased to announce the promotion of Rachel Cedroni to the role of Digital Mentorship Manager for the Florida Digital district; which is lead by District Manager Lauren Blasingim.

Rachel has made her mark at AMP in a short period since joining the company and Team Florida only a few months ago in November. She onboarded quickly to OPTIMA™ training in just 4 days tying the GSV onboarding record for Team Florida. During her onboarding months of November & December, she secured $21,590 in sales with $11,750 in OPTIMA revenue & $9,830 in GSV sales.

In January, Rachel was promoted to the very important mentorship team adding the responsibility of taking out observation day candidates in the expansion market of north Florida.  She attended the 2021 all virtual company meeting with a GOLD medal and a ton of excitement as she was showcased as a “2021 Top Rookie Front Runner.” She finished the month of January as the Digital Rep of the Month securing 10 OPTIMA, 10 GSV, 15 accounts for $16,870 with 62% POS – her personal best. BBTTY!

Rachel grew up in Rhode Island. Being a part of a Puerto Rican and Italian family, she was always around food & the tradition of great recipes. At a young age, she worked in her family’s deli where both of her grandfathers were chefs. After graduation, she naturally gravitated toward the hospitality industry. She moved to Florida and obtained her license to bartend in the Orlando, FL area. She enjoyed the fast paced work and later connected with a 5 Star Sous-chef to obtain her own butcher certification. She started to experiment with her own recipes and menu items on the side and eventually bought a food truck and hit the road selling at every market and festival she could find. She made from scratch sausages and homemade condiments. She later turned that passion in to a catering company keeping her “creative and occupied!”

Once Covid hit, she realized she needed to work in an industry where she could further control her earnings and that’s when she connected with Hanna Stedronsky. Rachel is super grateful for the opportunity to help small businesses because she’s spent the better part of her life working with or working as a “self-starter.” She is a spark of enthusiasm on our region’s What’s App. A constant encourager! She consistently calls on the advice of the experts in the business to further grow her talents and sales acumen.

Rachel lives on the beach in the Jacksonville Florida area. She has a dog named Sam, who’s basically a cat and a cat named Stache, who’s basically a dog. She is a certified scuba diver and has even explored under water adventures in the Bermuda Triangle. She loves spending time at the beach and doing anything active like kayaking or cooking (but not at the same time).

Rachel will be tasked with assisting in the development and growth of our digital Florida market. We are excited to add her to our leadership team and wish her the very best in this well-deserved promotion!

Congratulations, Rachel, on this well-deserved promotion!