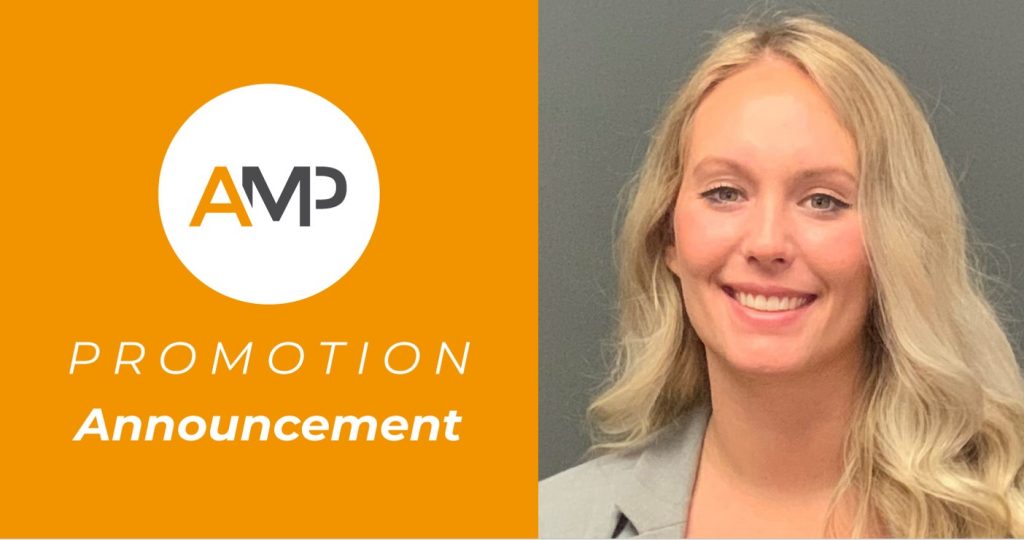 Congratulations to Morgan Goslin on her promotion to Onsite Classroom Trainer in Coralville!

Morgan Goslin joined AMP and the DIS Coralville Team at the end of September, celebrating almost nine months with AMP.  She put herself on the fast track to stardom by securing seven new businesses in her first two and half weeks, promoting herself quickly into the Account Manager role.  Month number one of Account Management truly opened her eyes to the limitless possibility her position offered her.  Morgan has taken on additional responsibilities like Observation Day Team, leading by example in the office by continuously beating her best numbers each month.  This past month in April she secured the Regions Rep of the Month Award by demonstrating her largest revenue month thus far $43,431 in revenue, her biggest week she’s ever had $17,094, 14 NDR and 81% renewal rate!

Morgan stretches herself and her goals not just monthly, but also on a daily and weekly basis.   It shows in her results!  Her lead by example style also made her an obvious choice for the First Day New Hire Training Role, a brand new position that did not exist before May of 2021!  Morgan credits Alex Hogan, Jenna Meyer & Maddie Cooney who really impacted her first few weeks at the start of AMP Training and are among the reasons as to why Morgan could see herself in a training capacity and making a big impact on the Coralville Team.

Born in Oregon, Morgan pushed herself outside of her comfort zone at an early age by moving to a foreign state where she knew no one.   Morgan’s passion for coaching comes from a softball background, playing at the collegiate level in Washington State and then transferring to the state of Iowa.  She relates the work that we do to her past athletic career.  It is hard getting knocked down and getting back up again and doing it over and over, however what may feel like failure is actually our growth.

Morgan states, “The most exciting part of the new role I’m stepping into is being able to see others achieve, grow, and learn.  Nothing in this line of work is more satisfying than seeing your peers succeed.”   Morgan resides in Belle Plaine, Iowa where she is currently in the process of purchasing a home with her significant other, Austin.  They are now proud parents of their red fox lab, Bleu.  Morgan loves being outdoors; hunting, fishing, camping, kayaking and so much more.

Morgan, on behalf of your DIS Team, we couldn’t be more excited for you to continue to step outside of your comfort zone and to show all of those around you what limitless looks like! Congratulations again!

Congratulations, Morgan, on this well-deserved promotion!