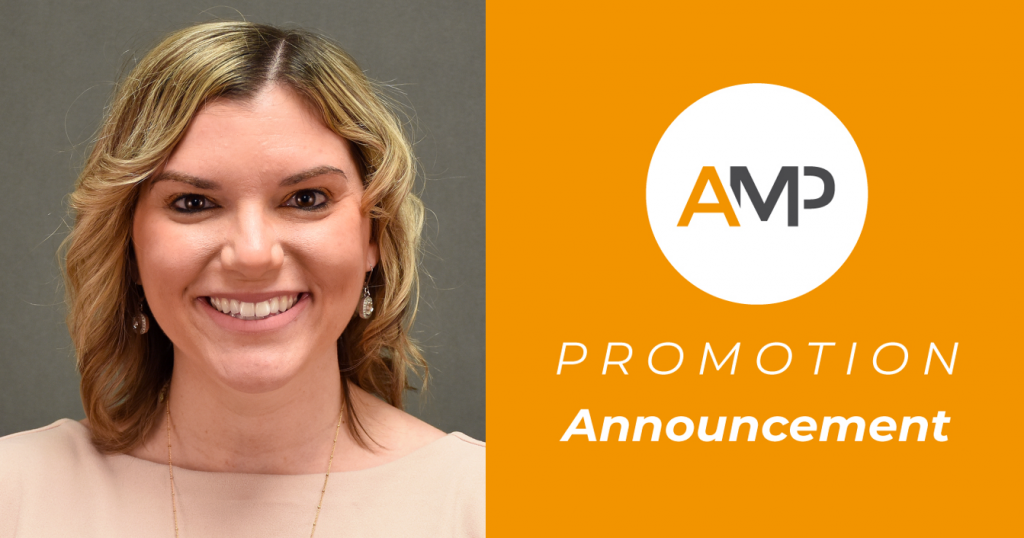 Congratulations to Kendra Hobby on her promotion to Senior Sales Rep for DeKalb Inside Sales!

Kendra joined AMP in July of 2018 coming from several years in the restaurant industry.   Her first week led to two major connections – one with Steve Ruckdaschel who trained her class and the second one to her teammate Lisa Menard.   Together, Kendra and Lisa (more on her in a bit) became leaders in the evolving De Kalb Inside Sales team.    Kendra still remembers her first new sale to a Scentsy consultant in Zionsville IN.   She went onto sell two more new customers in her first couple weeks to crush her onboarding.   Next up, Kendra was assigned a post print close in Crown Point IN where she added 9 more sales to stack on the success of that winning project.

Kendra’s first year with AMP closed with a huge exclamation point as she sprinted the final 4 months to earn her first President’s Achievement Award (PAA).   In her 2nd full month (September), Kendra compiled $24,930 with 38 accounts including her first two OTPIMA sales.    She tacked on three more strong all-around months finishing her sprint in 2018 with $82,200 in sales, 17 print new, 4 OPTIMA sales and 142 accounts.  She also won Sales-Rep-of the-Month all four months to close out the year.

2019 was further evolution and sustaining of success.  Kendra produced her first $30,000 sales month with 61 accounts in June.  Hard work, a positive attitude and a goal oriented mindset led Kendra to monthly averages of $22,548, 3.5 print new, 1.8 OPTIM and 56% POS for the 2019 year.  POS was an area that was targeted as a place to get better and Kendra showed what was possible with a 92% POS month of April.    With over $270,000 in sales and over 60 print new/OPTIMA on the year, Kendra won her 2nd consecutive PAA award for the very top sales performances of the year.  She also added four more Sales-Rep-of-the-Month awards to her ongoing tally.

2020 was quite a year for us all and it was quite a year of growth for Kendra.   Well, this was the year she became Kendra Hobby (previously Roberts) marrying her husband Jake in August.   Professionally, more growth.   Kendra increased her print new/OPTIMA by 14 and she further increased her POS by 5% while producing another year of over $250,000 in total sales.   Kendra touched 495 successful accounts and she added her 3rd consecutive President Achievement Award to her exceptional AMP resume.   She also helped lead and/or contribute to 17 successful print projects over goal for the year.

Present day, Kendra is on pace for her biggest year yet.  She’s averaging $26,224 in sales with 5 print new per month.   Her POS was now well into the 60% prior to DCP conversion where she had 68% DCP in May.   2021 has already produced Kendra’s biggest month of her career.   In February, she exceed $41,000 in sales with 8 print new and was recognized with her 10th Sales-Rep-of-the-Month award.

Prior to joining AMP, Kendra worked mainly in restaurants and within the service industry.  Kendra’s fiercely loyal, she spent 10 years with The Cheesecake Factory and did every job in the FOH and BOH and proudly work any station at any time (and frequently did).   She was promoted multiple times and became the SRII Manager (3rd highest) in the Schaumburg location.   Her success as a leader was attributed to a key leadership trait…a willingness to do any job and to never be above getting down and dirty in the dish pit when they she could not see past the wall of dishes.   To this day, Kendra holds the biggest respect and admiration for what it takes to be a staff member at any level at The Cheesecake Factory.

Outside of AMP, Kendra spends most of her time with her family:  husband Jake and kids Anniston (9) and Tripp (7).   There’s more to the family, four legged members too.   Add the dearly loved Scout, their chocolate lab and Berniece the 5 month old English Bulldog, the baby of the family.  At home, the Hobby’s love to have fierce family game nights with Trouble and Sorry being the favorite go to games.  They have a huge extended family around the De Kalb area with all nieces and nephews living rather close so tons of weekends are spent with family fun creating unforgettable memories.  Kendra’s favorite spot to vacation and travel to is Walt Disney World, but she’s agreed to “try” somewhere else in the coming year….even though she’s already slated for another Disney trip in October 2022.  Kendra’s amazing talents extend past sales.   In her free time she loves interior decorating and design, as well as, restoring old furniture.

The president of the Kendra Hobby Fan Club, Janelle Hannon (District Manager of De Kalb Inside Sales) had this to say about her,

“Kendra is a hardworking, hard charging, full of energy, huge personality that doesn’t take no for an answer.   She knows what she wants and goes after it with a determination that is infectious. I mean that in the best way, it’s what has made her so successful in life and at our work and I admire that about her.  She has a big heart and is always looking for ways we as a team can help build each other up.  She helps make our team feel like family.  Kendra is competitive with herself, she is someone who always knows where she is at and what she has left to go to beat herself, she’s running her own race and continues to set her bar higher and higher.  Extremely proud of the success and growth she has had since starting here and pushing past any challenge that comes her way.  I know this will be another huge year of crushing goals!  I am truly grateful to get to work with her every day!”

Congratulations, Kendra, on this well-deserved promotion!