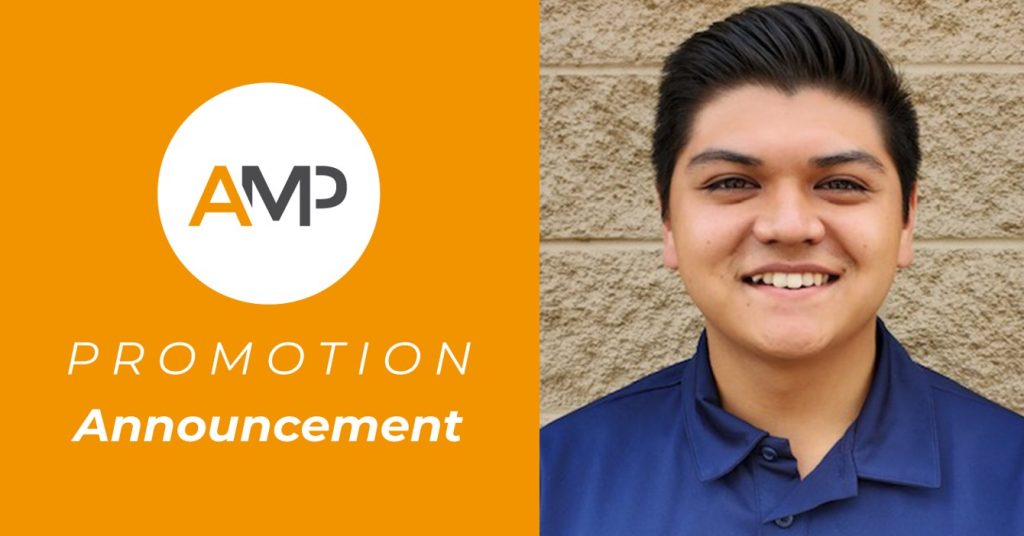 Congratulations to Tanner Jaksa on his promotion to Mentorship Manager for the Tennessee North Digital District!

Tanner joined AMP in June, 2021. He quickly achieved his onboarding goal and then took off!   In his first full month of July, Tanner built upon his early GSV success totaling $11,066 in GSV sales and really found his next level of achievement by adding OPTIMA to his arsenal.  That first full month, Tanner led all field sales influencers with $19,389 in OPTIMA sales.  He even added a text sale for good measure.  His all-around success earned him his first Digital Rep of the Region for the West Region.

Tanner hasn’t slowed since his exceptional start, he’s only gotten stronger! In August, Tanner tallied $13,619 of OPTIMA/Text sales with 87% DCP and secured 7 GSV sales. Last month, Tanner achieved something he’s been focused on since the all-company conference back in July. A bogey was announced that day rewarding the first field influencer to compile OPTIMA sales in excess of $30,000 for a single month – something that had never been accomplished in the history of AMP. On Saturday October 2nd, Tanner made his final sale of the month in the final hour to reach $30,520 in OPTIMA revenue for the month.  Tanner also inspired 8 GSV sales and did it all with DCP over 80% again.   Despite starting halfway through the year, Tanner is currently the #2 ranked Digital Rookie for 2021.  He’s on pace to hit the sprint qualifications for our President’s Achievement Award.  The Tennessee North Digital team, the West Region and all of AMP is grateful to have found Tanner (and grateful to Stephanie Conlin for finding him).

Tanner grew up in the suburbs of Washington, DC in Virginia.   Prior to joining AMP Tanner received a Bachelor of Science degree in Audio Engineering with a Minor in Music from Belmont University in Nashville, Tn.  After graduating, Tanner decided to make Nashville his home!  His hobbies include golf, playing guitar, producing music and recording artists in his home-based recording studio.

Fate and a bit of luck + skill by Stephanie Conlin helped guide Tanner to AMP.  Tanner heard about AMP from his girlfriend, Emma, who Stephanie first contacted.  Tanner knew he wanted to do something in the sales arena and this was simply serendipitous.   After spending a day with Jennifer Jones he was confident that he’d be good at our work and thoroughly enjoy it.  He was correct, on both counts.

Tanner possesses an exceptional desire to learn and has the rare ability to receive constructive criticism and immediately apply it to real world situations.  Prior to this promotion, Tanner has showed a ton of leadership initiative as a speaker on morning success calls, helping lead team meetings, always volunteering for observation days and spending time with other reps shoulder-to-shoulder.   His work ethic is stellar and he’s extremely disciplined – two vital components of sustained success at AMP.  In Tanner’s new role, he will spend even more time training and developing his teammates throughout the TN North District!  He’s already conveyed his next goal to become a Digital Manager!

Congratulations, Tanner, on this well-deserved promotion!