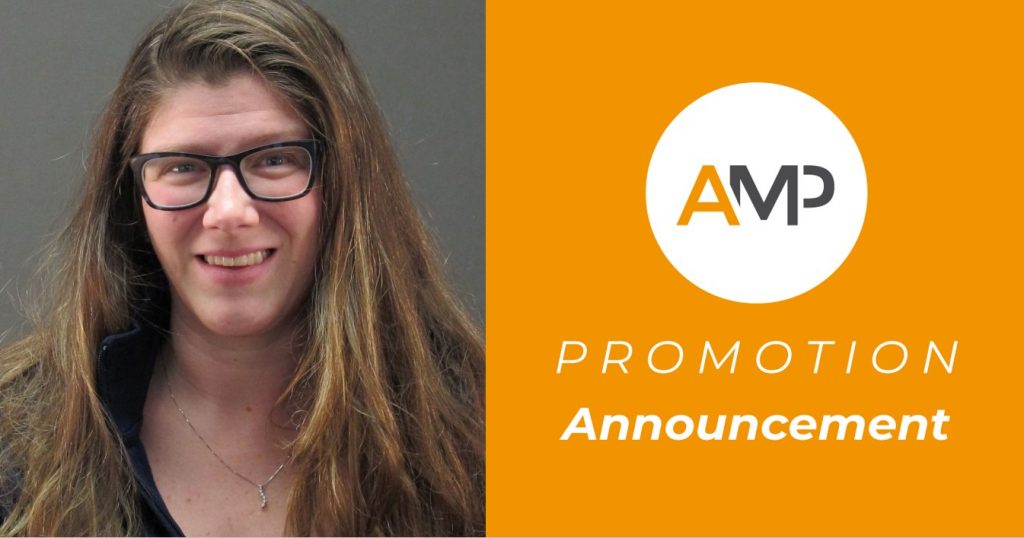 Congratulations to Kristin Bayle on her promotion to Director of Project Management!

As Director of Project Management, Kristin will remain involved in all existing areas of IT … Project management, scoping, communication, documentation, deployments … AND she will take on an expanded role in managing our senior and junior development team as well as external IT vendor relationships.

Inspired by the motto instilled during her high school years as a Freeport Pretzel—“You can eat us, but you can’t beat us!–Kristin developed a winning work ethic and a knack for sniffing out problems before they happen.  She possesses well-rounded institutional knowledge across many different areas of the business. Her good ideas, thoughtful advice, and work ethic imprint nearly every department across the office team.  As a go-to person for every system development, operations procedure and product roll out, she also brings a consistently helpful collaborative approach making her a well-respected AMP leader whether it is working on e contract enhancements, testimonial page improvements, reporting updates, or helping business users prioritize their needs.

Kristin began her tenure with AMP in February 2010 as a Proofreader in Quality Control.  Within 2 years, she transitioned to Ad Changes Designer where she was trained in Administrative tasks and worked with customers over the phone.  In May 2014, Kristin was promoted again into the role of Ad Changes Team Lead where she was provided the opportunity to flex her customer support muscles and became an instrumental force behind streamlining processes.  She successfully executed in this role until January 2015 when she was promoted to the role of Admin Manager where she oversaw the data entry team and managed contract workflow.   Over the course of three years, Kristin overhauled contract workflow to increase data entry productivity and accuracy.  In 2018, as she continued to execute impressively as the Admin Manager while extending her influence by joining our CRM “Super User” group. Since its inception she has been a driving force behind CRM architecture, workflow, reporting, and enhancement.   She successfully managed the Admin Team over four years supervising the Bookman to CRM transition and earning the coveted “2018 Manager of the Year” award.

Just a year later building on her “super user” experience Kristin joined the IT Team as an Agile Project Manager.  She quickly excelled in that role, helping transition the IT Team into a more efficient and organized software solution delivery engine.   Her natural, innate leadership attributes and people management skills made her an excellent fit to assisting the CTO with managing the Software Development Team, and she took on the expanded role of IT manager in 2019.

Abe Andrzejewski, Chief Executive Officer, who worked closely with Kristin on the latest e contract deployment had this to say:

“Kristin has the rare ability to see both the big picture that’s required in launching a new initiative, and all of the small granular steps that have to be taken to manage the scoping, testing and release of a new system, process or product. When you combine her deep institutional experience and “in the trenches” perspective with Kristin’s work ethic and her attention to the final, final details, it makes her a highly effective change manager.  She’s a shining example here at AMP of how successive mastery of the work in front of you creates wide open career paths.  I am proud of Kristin for continually stepping up and taking on more responsibility, and excited to work with her in this incredibly important role.”

Outside of work, Kristin enjoys spending time with husband Ben and children, Kolin and Bentli. As an avid gardener she is continuously looking for a way to sneak new plants into her backyard oasis–and yet a true Midwesterner at heart, she loves snow!  In her free time, she reads mystery/thrillers and is always up for a game of volleyball.

Her new role will continue to expand Kristin’s influence among the ranks of AMP leadership.

Congratulations, Kristin, on this well-deserved promotion!