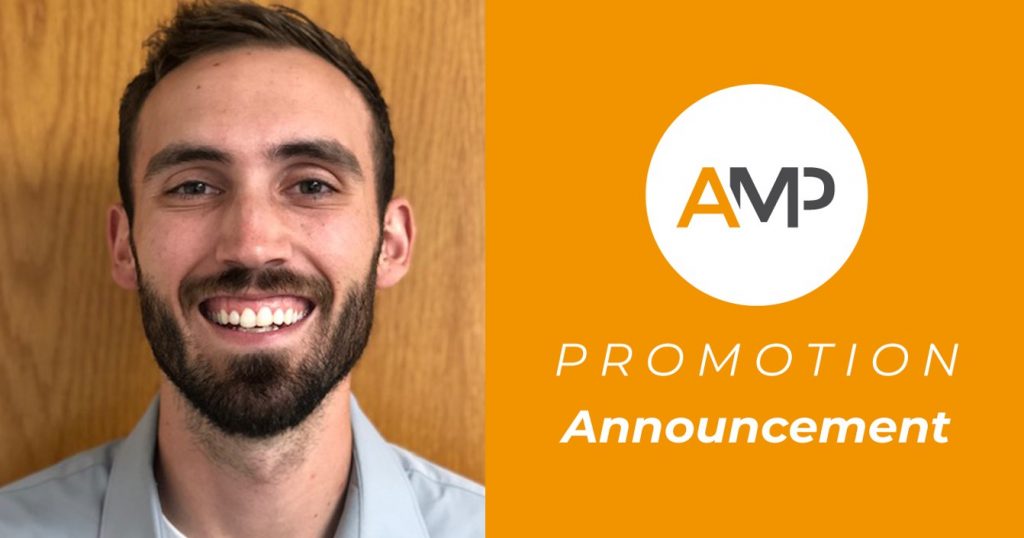 Congratulations to Austin Oppenheimer on his promotion to Digital District Manager for the Olympia, Washington market!

Austin joined AMP in June, 2020 coming aboard as we started to unearth from our homes after 2020 mandated lockdown.  New job, quarantine…NO PROBLEM.  Austin created immediate success knocking out 22 GSV sales in his first month.   He found himself back in training the 2nd week in was in the field to add OPTIMA to his arsenal.  He added 7 OPTIMA sales to his remarkable first month finishing with $19,755 in total sales.   Austin’s 2nd month showcased the consistency from which he’d become known:  24 accounts, $17,700 in sales with an incredible 92.3% DCP.   During these first months, Austin was promoted to the Mentorship Team, earned his status as Senior Representative and then started to train others as a Mentorship Manager.   For his first ½ year, Austin’s averages were 18.7 accounts per month, 7.7 OPTIMA sales per month with $17,655 in sales per month.   He was awarded both Rookie of the Year (Top 10 Rookie at AMP in 2021) and his first Distinguished Sales Award (Top 50 overall rep in the company).

You know how to welcome a new year?  Attack!  Austin did just that compiling his best month yet kicking off the new year.  In January,  he won his first Regional Rep-of-the-Month award with 22 accounts, 15 OPTIMA sales, 9 GSV and 1 text package for a grand total of $25,225.   That personal record stood for just one month because by March a new bar was being set.  At this point, Austin had earned a promotion to Assistant District Manager of our Des Moines team and while adding on the duties of training other teammates, Austin loaded up his March with $2,455 in GSV; $6,150 in text and $23,141 in OPTIMA sales.   New PR totaling $31,746 in sales and added his 2nd Rep-of-the-Region award.  He added another Rep-of-the-Region win in April and then his 4th of the year again in June.

The Austin AMP story was building quite nicely at this point and so was the Oppenheimer life story.  In July, Austin and long-time girlfriend, Emma, were married.  Not only did they get married, they selected the beautiful state of Washington as their future home.   When Austin said he was moving to Olympia Fields, Washington AMP came along for the ride.   Austin was promoted to Market Expansion Specialist to help get the territory started and seeds planted for bigger growth and the eventual development of a team.   Austin didn’t miss a beat in moving to a new state and entirely new markets.  He sold $18,080 in August and then, the following month, he tied his own personal record for unique accounts matching what he sold his first month he joined AMP – 26 unique accounts.  17 GSV sales; 12 OPTIMA sales; 1 test sale.   He finished September with $26,326 in sales.  As of today, Austin is building another great month now in the market he’s managing with 14 accounts sold and $15,447 in sales.  He is currently ranked the #2 digital rep at AMP!

Austin is an Iowa native, having been born in Emmetsburg, Iowa. He moved on to college at Ball State University in Indiana where he graduated with a Business Administration degree. After college, Austin made the trek back to Iowa and managed the Buckle store in Ames; where he met Emma. Following that, he then sold cars for the next three years at a Honda dealership.   The last year plus has been a very exciting time for Austin and the Oppenheimers.  Austin’s ascension at AMP, he and Emma joining in holy matrimony, moving to Washington, numerous promotions…you’d think that’s enough for a just under 17 months.   One more big thing was added, Austin and Emma are expecting their first child toward the middle of 2022!   Truly awesome!