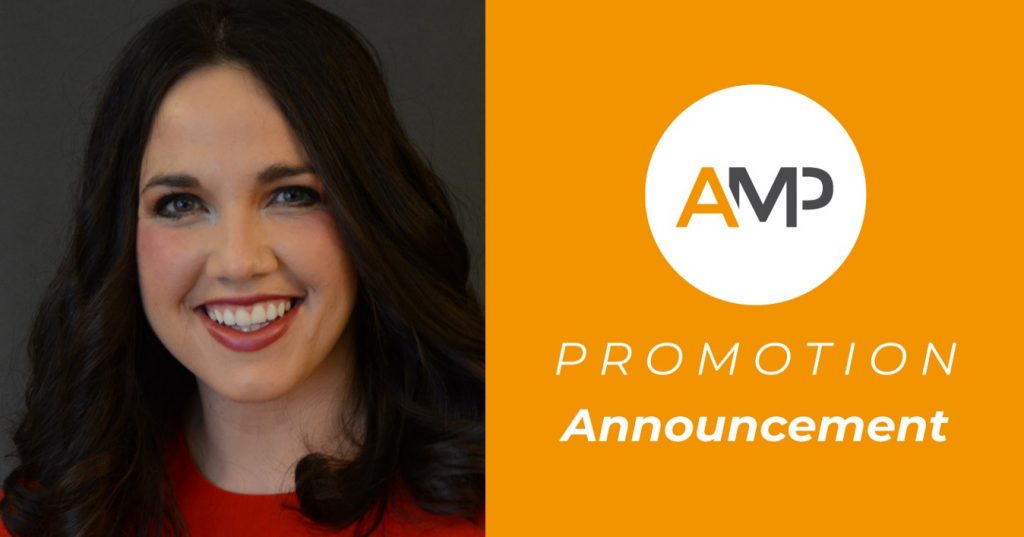 Congratulations to Ashley Fawkes on her promotion to Senior Vice President of Inside Sales!

In her new role, Ashley will oversee all of AMP’s inside sales comprised of our Digital Account Manager teams, Text Specialist Team and DeKalb Inside Sales Traditional Team.

Ashley started her AMP career as a field representative in June of 2010 after she graduated  from Augustana College with a degree in Business Administration. Her first print project was LaSalle/Peru, IL and not surprisingly she achieved her goals two weeks ahead of schedule. She was promoted to Senior Sales Rep and worked several successful projects: Spring Valley, Ottawa & Channahon. Over her first three months in the sales field, Ashley averaged $22,718 per month.

As great as she was in the field, Ashley had a calling to take her career in a different direction. She joined Recruiting as a HM at the end of 2010 and earned Hiring Manager of the Year in 2011. That year, she earned the prestigious million dollar club as her hires generated over $2 million – a record for annual contribution! Based on her success and desire to inspire others, Ashley was promoted to Assistant Department Manager and then 6 months later was asked to lead the Recruiting Department.

In 2015, an email was sent out company wide asking for anyone in at AMP to raise their hand if they might be interested in being part of and eventually leading our still very small and growing Digital Inside Sales team. Ashley raised her hand and transitioned from recruiting, after transitioning from the sales field, to selling over the phone. She started the same way any new member joins an inside sales team at AMP with hundreds of cold calls and countless hangups. In just her first four days, she sold two new customers. Ashley took that solid, growing understanding of how to make new sales to Schaumburg, where her combined mission of providing exceptional client experiences with a strong and directive ‘sell to help’ became the mantra for the Schaumburg team and eventually all of Digital Inside Sales.

From 2015 to the middle of this year, Ashley has led Digital Inside Sales from slightly over $1M in annual sales when she joined the team to just under $12M in sales last year. The team has grown from one manager (Ashley) to now six direct managers plus a number of additional trainers and leaders throughout the region. The team has grown from occupying one office in Schaumburg that was roughly 1200 square feet to four offices in Schaumburg, Coralville, Toledo and now DeKalb.  With an unbroken line of perpetual growth, she’s led the team from under 65% account renewal rate to months in excess of 80% account renewal rate. Note – Ashley set the vision for an 80% renewal rate back when we renewed about 2/3rds of all our customers. She set a vision, built a plan and asked everyone in DIS to join her on a mission. Under Ashley’s leadership, total sales records, renewal records and new digital revenue records have been set and then reset with higher bars of achievement year-after-year-after year.

Ashley became the Vice President of Digital Sales at the end of 2019 and over the last two and half years her role has evolved dramatically well beyond sales leadership as she’s become a key contributor in the development of products, processes and systems for all of AMP. No matter how much more gets added to her plate, Ashley remains a Sales Manager at heart and her happiest place is side-by-side with reps in DIS. So far in 2022, she’s demonstrated seven upsells and tallied over $25,000 in sales while on training days!

When she’s not working, Ash enjoys finding time with her husband Tom, a member of St. Charles Police Department. She and Tom are kept on their toes with three children: Addie, Eli and baby Scarlett, all of whom are quite active and have their own busy lives for Tom and Ashley to navigate.

Congratulations, Ashley, on this well-deserved promotion!

July AMP Employee of the Month!