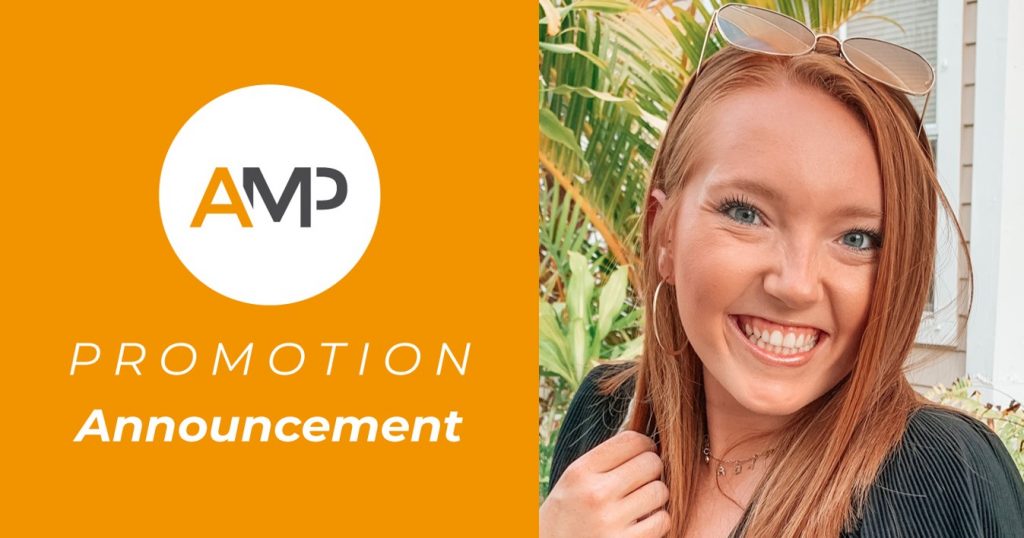 Congratulations to Morgan Bowker on her promotion to Senior Hiring Manager!

Morgan has had quite an adventurous first year and a half with AMP. Morgan joined our Coralville Digital Inside Sales team in April of 2021. She was a recent graduate of the University of Iowa where she majored in Psychology and Human Relations. Morgan said that after she met with Whitney Phelps, and learned that she too had a major in psychology she knew that she could make a difference at AMP.

May of 2021 was a big month for Morgan. She walked across the big stage for college, transitioned from DIS to the Recruiting Department, and at the end of her first week of recruiting training, what she thought would be a big graduation party for herself, friends, and high school sweet heart Sam, turned into an engagement party! Morgan and Sam then moved from Iowa City to North Carolina in July of 2021, and then made the long haul across the country to plant roots in January of 2022 in Denver, CO.

While this past year has been a big change for Morgan, she would tell you herself that she’s made a great evolution here at AMP. One of my favorite things that Morgan told me in her interview was that she’s going to make a great Senior Hiring Manager, because she knows what it’s like to ride the peaks and valleys of our work and to keep pushing herself to learn and grow. Morgan is like a sponge and is constantly learning new ways to improve personally and professionally. She’s improved her hiring significantly over the last 6 months, to include her best month of hires! Morgan recruits for the Central Region our South Chicago, and Indy United Teams. She has brought to AMP Rookies Robin Wheeler, Garrett Walton, Yoshie Fuentes, and Sophie Cormier.

Congratulations, Morgan, on this well-deserved promotion!