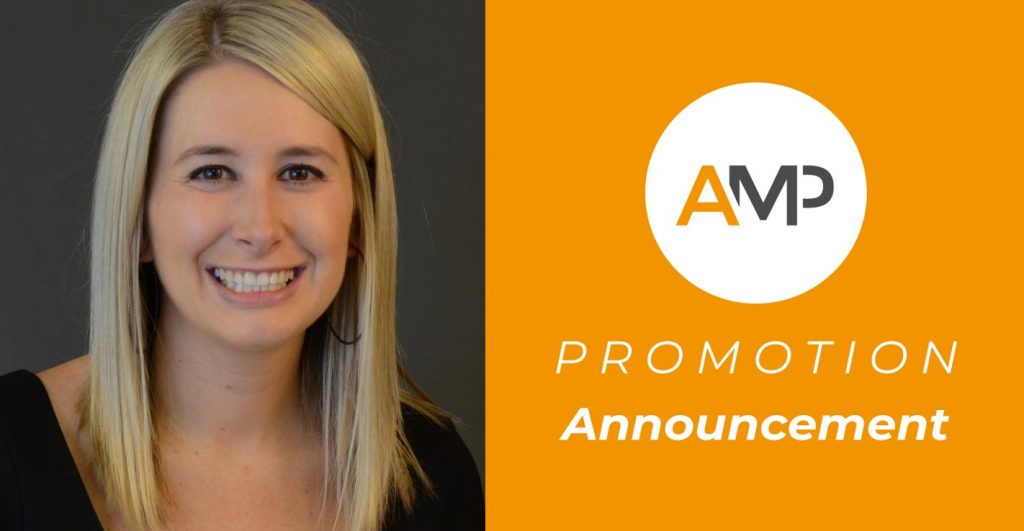 Congratulations to Alex Hogan on her promotion to Recruiting Team Manager!

Alex’s journey at AMP started 9 years ago as an Intern in the Sales Support Department under the leadership of Tiffany Mills. Alex worked very closely with the Text Team and supporting our new Closeby® Text Marketing Customers, while she was a student finishing her senior year at Northern Illinois University. Alex officially joined AMP in September of 2014 in the Recruiting Department as the Recruiting Support Specialist.

Growing up with both of her parents, and grandfather, owning small businesses. Alex has always had a passion for community and small businesses. As the Support Specialist under Ashley Fawkes in the Recruiting Department, Alex learned to improve our ATS Talent Tracker, source candidates, and attend college career fairs. In the fall of 2015 Ashley knew that Alex had grown tremendously over the last year, and that Alex had the skills to be promoted into a Hiring Manager position. Alex would tell you that she was full of worry, and doubt of herself in the beginning, but with the guidance of those around herself, and the AMP training she quickly became one of AMP’s best Hiring Managers.

It’s no coincidence that Alex and Ashley Fawkes have worked together since the beginning. Ashley and Alex launched our Digital Inside Sales team with a big vision, and an even stronger work ethic to make it happen. They begin the team in a small office space on the second floor of our Walden Office Square building. On a team that started with no OPTIMA™ customers, in that tiny office in Schaumburg, over a span of 5 years has grown to 3 states with office locations, to a Senior Vice President, Regional Manager, 3 District Sales Manager, Classroom Trainers, Technology Liaisons, Regional Account Managers, Senior Account Managers, Account Managers, and Account Manager Support Specialists. Alex has also built the Traditional Inside Sales Team, as well as many of our corporate office team including team members from the Verification Team, Admin Team, Accounting Team, and our very own Director of Training, Connie LaPak. In such a short amount of time, there is probably no single person who has had a bigger impact to building our business through talent acquisition than Alex Hogan.

Alex is a 3 time Hiring Manager of the Year, 3 time President’s Achievement Award Winner, and 5 time Business Builder Award Winner. THE BBA is recognized for bringing in over $750,000 in Rookie Revenue annually. In 2021 Alex brought in over 1.1 million dollars in rookie revenue, and grew to over 3.05 million dollars in rookie revenue, a team record.  Alex consistently leads the team in activity and number of hires. She had her personal best of hires in June of this year. Alex has been a team leader far before she was promoted. She has been training, developing, and inspiring new hiring managers since her days as a Recruiting Support Specialist.

Alex and husband Tommy have 2 children Tanner, and Reese. They enjoy boating, country concerts, new restaurants, and visiting their family lake house in Wisconsin, as well as beach house in Marco Island, FL.

Congratulations, Alex, on this well-deserved promotion!