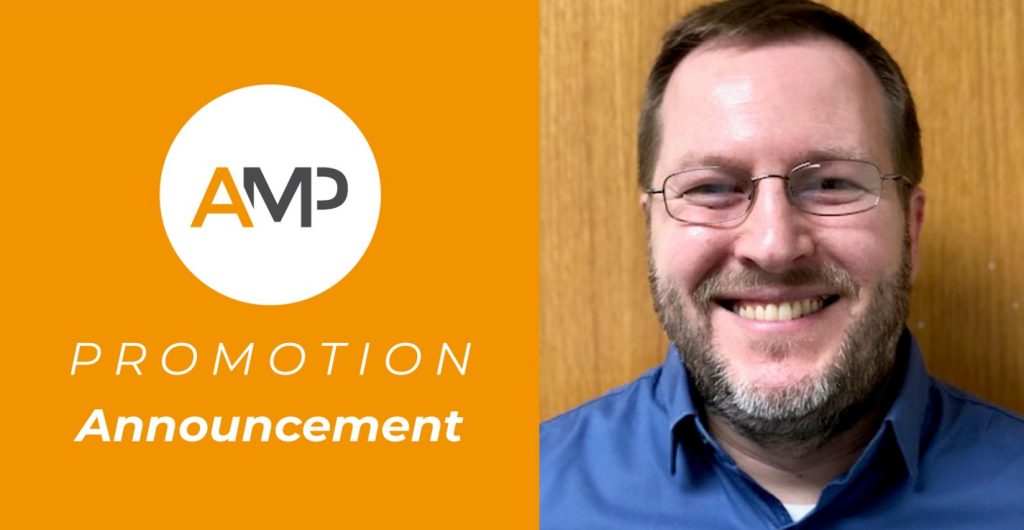 Congratulations to Josh McGraw on his promotion to Recruiting Team Manager!

Josh began with AMP in January of 2020 as a sales member of the Des Moines, Iowa team. Previously to AMP Josh spent 20 years in the retail industry. After high school, Josh began working at Best Buy. Josh’s natural leadership, hard work ethic, and a personal drive to be the best earned him numerous promotions from Team Manager to Operations Manager. After 11 years with Best Buy, Josh accepted a role with Walmart in Iowa City. There he continued to lead performance, coaching, teaching, and developing those around him. He was also responsible for hiring and inspiring others to join the team.

After many years at the helm of the ship with Walmart, Josh’s family had continued to grow and he knew that he while he felt a lot of success, and accomplishments with his role and team, he wanted to have more time for his family, his best role, Dad!

Josh’s first 6 months with AMP were anything but normal. Six weeks after Josh began with AMP, the COVID-19 pandemic hit. Josh had just started in his first town of Perry, IA where he was helping small businesses with the Google Street View Trusted Virtual tours and OPTIMA™ services.  In a few short months, and our work looking different every day, Josh dug in and held the line. He learned to sell all of our digital products, show our work to new AMP members, and emerged as a strong leader that he knew he always was. Josh was promoted to District Sales Manager of the Des Moines, IA team in July of 2020.

Josh led the Des Moines team to one of their best years. He developed 2 Assistant District Managers, one our very own Austin Oppenheimer, numerous Mentorship Managers, and strong Rookie contenders. Josh has been a phenomenal leader, and developer of others around him in the field, and through his hard work, and coaching of another amazing leader Austin, our Washington District was launched.

In August of 2021, Josh and his family were ready for a pivot. The McGraw family had become busier and busier, and Josh wanted a little more time home with his children, before they grew too fast. Josh joined a new venture with our Recruiting Department. Josh had our fastest breakout as a Hiring Manager. He had our best performance by a rookie in their first month ever. He came in and hit the ground running, ready to build the Iowa team.

Over the last year, Josh has earned himself the promotion to Senior Hiring Manager, and helped build a special team in new regions of Launch Markets Recruiting. He has brought on talent such as Karighen Gibbs, Haley Bowman, Cheryl Pruitt, and Casey Banks all in the year 2022. Josh has become a strong leader showing our high activity, eye for talent, and ability to connect with candidates all across our foot print. Josh was a leader far before he had a formal title, and he has a passion for always helping those around him.

Josh and his wife Jessica have four children, Hunter, Emma, Oliver, and Lincoln and all reside in Ankeny, IA. He’s an avid Ravens and Iowa Hawkeye fan. He loves to coach his children in soccer, flag football, and basketball.

Congratulations, Josh, on this well-deserved promotion!