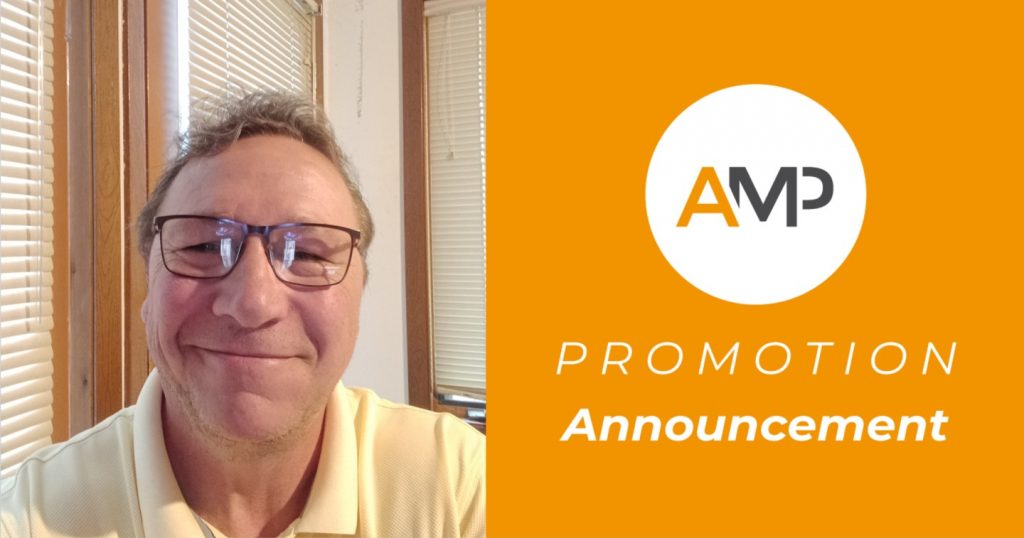 Congratulations to Daniel Webster on his promotion to Mentorship Manager — Team Willinois!

Dan is the definition of pure, unadulterated joy. Everyone who works with him has nothing but great things to say about his attitude, his energy and his unrelenting desire to become great at this work. One of my favorite things about Dan is that he has totally embraced the AMP mission. He works with great passion to serve the local business community in every town. And when he presents our solutions, business owners simply trust him.

Dan joined AMP on May 23rd and instantly became known as the guy whose great attitude never wavers. It’s a rare quality and one that I truly value because, let’s face it, life does its worst sometimes. But Dan presses on through every obstacle. Dan quickly ascended to greatness at AMP. In his first month he secured $23,670 in total sales with 28 accounts. Dan is currently ranked 3rd overall as an AMP Rookie and averages $22,663 in sales w/ 17 new digital per month & $5,202 in OPTIMA™ sales. What impresses me most about Dan is that he is so devoted to the “sell to help” philosophy that he seems to barely notice when customers stall or brush him off. He believes in what we do!
Since joining the mentorship (observation) team in July, Dan has taken several job candidates out on observation days and has helped us to attract several more rising stars with his magnetic personality and effective salesmanship. Another huge shout out to Ashley Joyce for finding Dan. He is quickly becoming an influential leader for Team Willinois and has helped to create a truly inspiring team dynamic.

Dan’s drive toward success was built on consistent new business. In just over 3 months, he has generated huge momentum, consistent sales and a consistently high DCP – averaging 89% DCP. When I say he moves quickly, let me put it this way. I’m a shorty so I normally wear heels. But on days that I work with Dan, even though he towers over me, it is flats all the way!!
Before joining us, Dan held other sales positions and worked in many service-oriented roles which contributed to his phenomenal people skills. He would tell you that he enjoyed his career path but that his love for AMP, other than our awesome products and services, is that he KNOWS we truly care. We care about our customers. We care about our teammates. And no one is just a number here. I love that Dan recognizes that distinguishing aspect of AMP culture. Case in point: I’ll never forget the day of Dan’s Optima training when he held up a sign that read: “You rock Halle!” That’s what caring looks like in Dan’s world. We’re lucky to have him.

Outside of work, Dan loves spending time outdoors. He frequently goes camping with his family. Fun facts: he has worked at four different summer camps, taught kids how to ski at local resorts and also served on the ski patrol in northern Wisconsin. He also worked as the activity director for a nursing home. Needless to say, he has a huge heart and lives to serve others.

Congratulations, Daniel, on this well-deserved promotion!