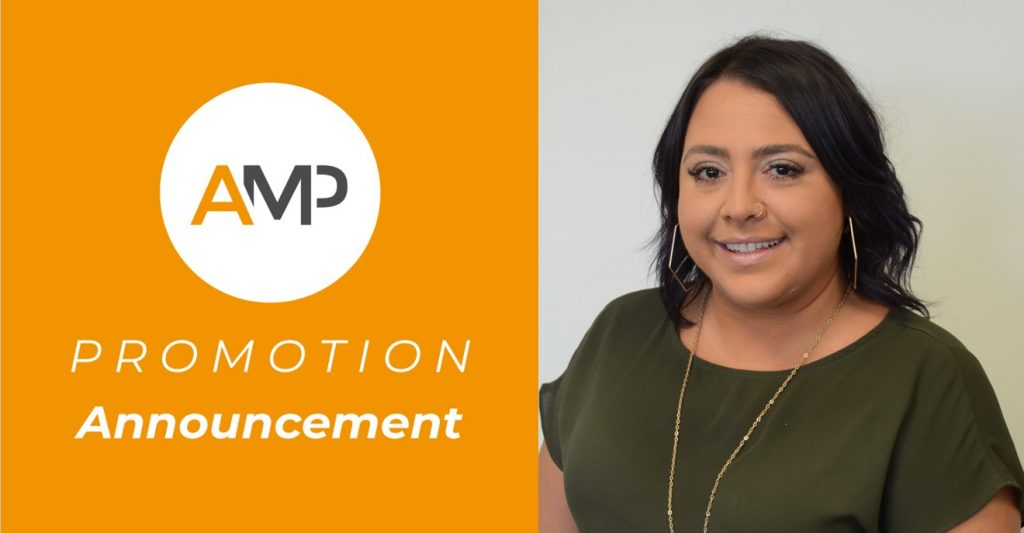 Congratulations to Angelica Muriella on her promotion to Onboarding Sales Training Manager!

Since joining AMP, Angelica (Ang) has played a vital role in the building of our Digital Inside Sales Division. Ang is moving into a newly created, crucial and strategic role at AMP that will make an enormous impact on the growth of our company’s digital footprint.

Ang came to AMP three and a half years ago on our Schaumburg Digital Inside Sales team. As an OPTIMA™ Associate Account Manager, she quickly demonstrated her ability to influence new prospects and create customers earning her first, of many promotions to Account Manager. Ang continued to evolve and ascend by renewing at high rate, driving strong NDR and acquiring more new customers thus earning her next promotion to Senior Account Manager. She has been one of the top text sellers for the last two years at AMP, continuing to show what’s possible. Ang received the Evolver of the Year Award in 2021, earning the prestigious President’s Achievement Award. In 2022, Ang is averaging over $50,000 in total monthly sales with a 22% NDR increase, and just under 15 NDR accounts per month and she is currently ranked #2 overall on our growing Digital Inside Sales team. She leads all of inside sales with over $10,000 of NDR revenue per month and is on pace to beat the $100,000+ annual NDR record she set in 2021. Over the years, Ang has taken an increasing role as a trainer, especially to new hires, and her impact demonstrating new sales during training days has been instrumental in helping to develop our Associate Account Management Team.

In her new role, Ang will focus primarily on the development of the newest Associate Account Managers and Inside Sales Representatives at AMP. Ang will be responsible for fostering the growth of the next OPTIMA™ Account Managers as they graduate from AAM to AM status.  She will work with our newest inside sales team members, all throughout the country, ensuring their early onboarding success and the development of the necessary strong selling skills to graduate to the next phase of their AMP insides sales career as Account Managers.  Ang will also continue to personally sell and lead by example as she has in her training role over the last couple of years. Ang will be a forefront leader at AMP, as we move into brand new markets throughout the United States, acquiring OPTIMA™ and AMP Digital customers from coast to coast.

Ang came to AMP with multiple years in the restaurant industry, bartending at Moretti’s. She was someone who took on lead roles during her time at Moretti’s and in other areas of her life.  Ang balanced all aspects of her position, while going above and beyond for her customers.  This type of experience and work ethic has translated into her work as an OPTIMA™ Senior Account Manager and Inside Sales Trainer today.  Ang is a natural born leader and which can easily seen when you step into the Schaumburg office.

In Ang’s free time she enjoys spending time with her large Sicilian family. Her mother is someone she looks up to highly, and spends lots of time shopping and hanging out with her. Ang is a wizard in the kitchen and knows how to cook a fantastic meal!

Congratulations, Angelica, on this well-deserved promotion!